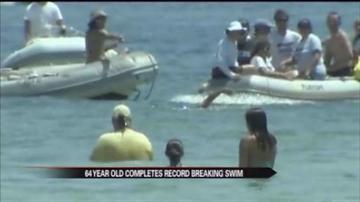 The 64-year-old completed the grueling 103-mile swim Monday afternoon on her fifth attempt.

In her past attempts, dehydration, exhaustion, or poisonous jellyfish stings forced her to quit.

This time, she overcame the obstacles by wearing a protective suit, a newly-created repellent cream, and a special facial mask.

"I have three messages. We should never ever give up. Two is you're never too old to chase your dreams. Three is it looks like it's a solitary sport, but it's a team," said Nyad.

A 35-member crew monitored her health and supplied her with food and water during the swim.