Did John Edwards use campaign funds to cover up an affair? 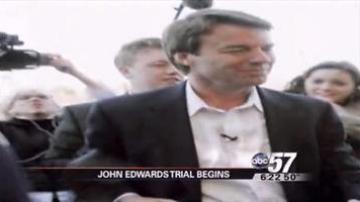 Edwards faces 30 years in prison and thousands of dollars in fines.

He admitted what he did was wrong, but said he didn't break the law.

The prosecution's star witness is Andrew Young -- a former aide.

He claimes the money was used to cover up Edwards' infidelities.

Edwards' lawyers said young has a vendetta against his former boss.