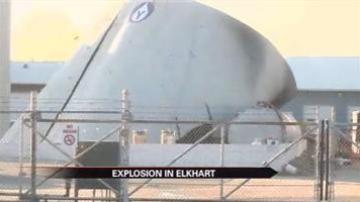 ELKHART, Ind. -- A diesel tank explosion at Yoder Oil Company sent one man to the hospital after witnesses say he suffered severe burns.

The Employee was air lifted to St. Joseph Hospital’s burn unit in Fort Wayne after he caught fire. The explosion happened around 3 p.m. Friday afternoon.

Witnesses say the blast could heard and felt throughout the industrial park.

Kevin Noffsinger and his partner were operating a power-washer when he heard the sudden blast hundreds of feet away at the neighboring business Yoder Oil Company.

When Noffsinger looked over, he saw a man on fire. The employee was on an elevated lift, working on a diesel tank, some 30 feet in the air when, witnesses say, a spark from his cutting torch caused the tank to explode and then collapse.

“He was dancing around because the fire was traveling up his legs, so eventually it got so intense, the heat and the flames, that he jumped over the edge of the scaffolding and from there we lost sight of him,” said Noffsinger.

That is when Noffsinger called 911. Witnesses say the employee plummeted several feet to the ground while still on fire and suffered some severe burns as a result of the explosion.

“Oh, it was something else. It was pretty intense. Really, you don't expect to see those types of things,” said Noffsinger.

Moments later, when fire crews arrived, the employee was rushed to Elkhart Municipal Airport where he was air lifted to St. Joseph Hospital’s burn unit in Fort Wayne.

Fire officials say the company was in the process of scrapping out the diesel tank and had recently emptied the tank of all its diesel fuel.

People from nearby businesses say workers have been working on the removal of two of the company's diesel tanks for the last week. Noffsinger said since the work began, he was concerned about how close employees were working to fuel and other flammable products.

“They were cutting and sparks were flying and I though what if it blew up? OSMC is right next door, along with our building. That could really be dangerous,” said Noffsinger.

Fire officials say they are still investigating the cause of the explosion. We reached out to company leaders for a statement, but they declined to comment.