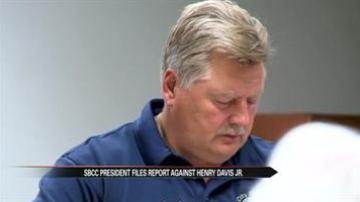 The police report is over a comment Davis Jr. allegedly made to Dieter about his wife.

Council president Oliver Davis spoke with ABC57 news about the filing of the police report saying,
"We have a lot more important things to be doing in our Common Council at this present time. We're in the middle of budget season, we're in the middle of taking care of our streets, taking care of vacant and abandoned homes, making sure the grass is cut, and protecting our city from all of the crime."

He continued, "and I hope that when council members have these kind of disagreements about comments that are said during meetings or even after meetings that they can have breakfast, have lunch, have dinner and resolve some of those matters outside of council time."

Oliver Davis said he does not expect all of the Common Council members to be friends, but he does expect them to respect each other.
Share this article: