Director of Public Safety fails required tests while on leave 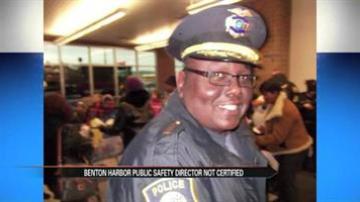 BERRIEN COUNTY, Mich. -- Benton Harbor's Director of Public Safety has been on paid administrative leave since July 2013. He has to pass two state exams to be reinstated, but so far he has failed both exams. Some wonder if he should continue to be paid.

Director of Public Safety Roger Lange was put on administrative leave in July 2013 after the city of Benton Harbor was fined thousands of dollars because the public safety department was not up to code.

One of the issues was Lange was not properly certified. Lange didn't take the Fire I and Fire II examinations.

The city gave Lange until August 31st to pass two exams that certify him to fight fires.

He took them and failed.

Emergency Financial Manager Tony Saunders says Lange did not pass the physical part of the exams.

A city commissioner says Lange is still on paid administrative leave, but it's unclear how long that will last.

"I definitely don't agree with him getting paid to do nothing, paid for nothing," said Dontrel Robinson, a resident of Benton Harbor.

Residents say they need a chief who is qualified to do what he asks his officers to do - fight fires.

"I like him as a person. He's a good person. I want him to study, get the knowledge  you need to know, pass that test and if he learns how to fight fires of course put him back on there but until then, lay him off all the way," said Robinson.

The president of the Michigan firefighters' union says legally people can take the test as many times as they need to pass.

City commissioners say they are not sure what Roger Lange's future is with the Benton Harbor Department of Public Safety.