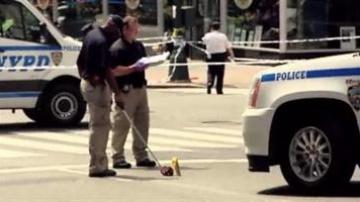 NEW YORK -- A disgruntled employee shot and killed a former coworker and shot eight others one of New York's busiest intersections.

Police say that Jeffrey Johnson, 58, killed the former co-worker and shot eight others outside of the Empire State Building on Friday.

Johnson is a former clothing designer who was laid off a year ago. He came back to confront his employer.

Police also say that the gun was sold in Florida in 1991 and that Johnson did not have a permit to carry it.

"I heard multiple gun shots, I say about 12 of them and I thought they were firecrackers at first," said eyewitness George King. "I didn't know what was going on--everybody started running for cover."

The police shot and killed the gunman.

The eight others injured in the crossfire are expected to be okay.