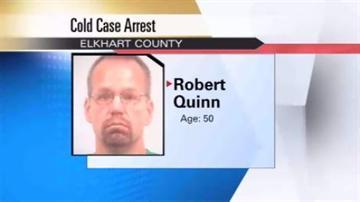 ELKHART, Ind. -- The Chief Investigator for the Elkhart County Prosecutor’s Office spoke with ABC57 about the resolution to a case that had remained unsolved for 25 years. Earlier this week, an inmate was charged with the rape of a 10 year old girl in 1988.

Solving a case 25 years after it happened is not unheard of, but it is very rare.

"It's pretty astronomical that something 25 years old, especially a rape, we were able to still have decent enough evidence to resubmit and get a positive hit,” said Edward Windbigler, Chief Investigator for Elkhart County Prosecutors Office.

According to the Rape, Abuse and Incest National Network, 97 percent of rapists in the United States will never spend a day in jail.

In this case, the alleged perpetrator, Robert Quinn, is already serving time for child molestation.

Quinn allegedly abducted and raped the 10 year old victim, then returned her to her neighborhood in March 1988.

"This one, which is everyone's worst nightmare. This is the fear that everyone has that your child is abducted and sexually assaulted. This was a true case that really happened and we had nowhere to go with it back in 1988. Didn't know who the suspect was, he had no connection to that family,” said Windbigler.

The persistence of the victim caused investigators to take a second look at the case.

DNA evidence is kept in a lab until the case is closed.

In this instance, investigators were able to scan the DNA from the original rape kit taken in 1988 and found a positive match to Robert Quinn.

"This is a very unusual case and it's spectacular for me that the person who's responsible for this is going to be held accountable,” said Windbigler.

Quinn is currently in jail on a child molestation charge.

He is expected to be released in June, but the new charges will most likely keep him in the Department of Corrections through his trial.