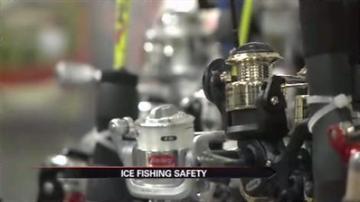 ST. JOSEPH, Mich. -- Think twice before going on the ice!

That is the DNR's message to folks after a number of recent water rescues.

Employees at the Boardlows Fishin Hole in St. Joseph, Michigan, say they get quite a few people through the doors everyday who are looking to stock up on ice fishing essentials.

Officials say to wait until the ice is at least four inches thick, which is why some fishermen are worried the ice fishing season could be cut short.

Laukus says they are hoping for a good ice fishing season. It’s one of the reasons why the shop decided to stay open this winter, rather than reducing its hours like it has done in the past.

It's a decision Laukus says is paying off.

"We get five to eight people in here a day asking about ice fishing. What kind of bait we have, what the hot lure, what’s a good lure," said Laukus.

However, mother nature is not cooperating with these eager outdoors men looking to ice fish.

The DNR is warning people about the thin ice. It’s recommend that there be at least four inches of ice for fishing, but right now many avid ice fishermen are braving frozen lakes and ponds that only have two to three inches of ice.

"I know it doesn’t sound like a lot, but it will hold you. You can go ice fishing and can have a very enjoyable time doing it, but again it is ice fishing, it’s never certain."

Laukus says for people who may be taller and weigh more, It's better to wait until the ice is at least the recommended four inches thick.

He says one of the biggest dangers is not knowing where pockets of thin ice are, which is why others, like himself, are waiting to hit the ice.

"The wrong step at the wrong time and the wrong weather and you could find yourself in a very deadly situation," said Laukus.

If you are going to go ice fishing, it’s recommended that you don’t go alone.

The DNR also says to make sure you come prepared --- having a life jacket, icepicks and a rope handy. Officials say the best rule of thumb is always act as though you are walking on thin ice.