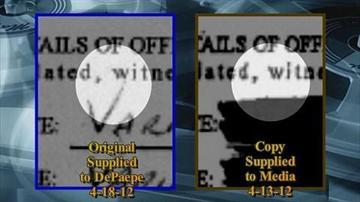 SOUTH BEND, Ind. – It took nearly 48 hours for Karen DePaepe to get her employee disciplinary notice from the City of South Bend; ABC 57 received a redacted version of it five days prior, after a four hour wait.

The delay was a result of the City Attorney’s Office needing to “review” the document, according to DePaepe.

Wednesday morning, DePaepe and her attorney attended her exit interview at the Human Resources department inside the County-City building downtown.

At the interview, they were told her personnel file was complete and in the hands of the interviewer, who had not been given the approval to release it to them.

When they pressed HR to contact the city’s legal department to find out what the hold-up was, a phone call was made to Aladean DeRose, interim lead city attorney, according to DePaepe.

When the result of that telephone call did not satisfy DePaepe’s attorney Scott Duerring, they went up to the 14th floor of the building to speak with her themselves.

When they arrived, they were greeted by deputy city attorney, Andrea Beachkofsky who informed them DeRose was not in the office; which ran contrary to phone conversation held moments before hand, according to DePaepe.

Beachkofsky informed DePaepe and her attorney, the ex-employee’s personnel file was not ready to be released, also contrary to what they were told in HR, and they would have to return later that day to  pick it up, according to DePaepe.

When her attorney was finally provided with DePaepe’s copy, per the rules and regulations in the South Bend City Employee Handbook, we had an opportunity to examine it and the documents that were attached to it.

The disciplinary notice was the original golden colored triplicate page. It was marginally difficult to read in some areas, while clear in others.

The inconsistencies between the two versions began with what appears to be text that may have been added after the document was released to the media last Friday.

In addition to the presence of text, the content of the redacted sections is drawing concern.

On the version of the disciplinary notice provided to the media, the city attorney’s office blacked out the time; date; witnesses; and details and circumstances section.

The original copy supplied to DePaepe revealed the phrase, “Variable, See Attached” under both the time and date sections; and simply “See Attached” in the witnesses section.

Why these simple phrases were redacted on the version released to the media has not been answered.

Some argue the redacted version of the document released to the media intentionally paints a negative picture of the termination; with connotations of wrong-doing so utterly illicit it could not be shared with the public out of safety concerns.

The vague description of rules violated, “Conduct Unbecoming a City Employee” escalates the intrigue, especially when the large section that follows promises specifics of the violation is completely blacked out.

Some find the redaction of this section, titled “Details and Circumstances (be specific),” highly suspect because the city attorney’s office blacked out all four lines despite there being text on only one and a portion of another.

The text in this section read, “Please see attached memorandum,” again drawing questions as to the reason it was redacted.

Had DePaepe been given, let alone shown, a copy of the disciplinary notice when she was terminated this may all have been avoided. It would have also been proper procedure based on policies found in the City Employee Handbook.

However, that did not happen; and now we are left to wonder why it took two days for them to file the disciplinary notice after her termination; why the sections appear to be needlessly redacted; why there appears to be writing on the original that is not present on the copy shared with the media; and why it took two days for the city attorney’s office to review the document before releasing it to DePaepe.

Mayor Pete Buttigieg could not explain why the words, “Variable, See Attached” were redacted. He recommended the city’s legal department be consulted on the matter. We have begun that process and are awaiting response.

Meanwhile, the two attachments to the disciplinary notice were a single-page, single paragraph description titled, “Confidential” that had information that is anything but anymore, and a copy of a press release sent out by the Mayor’s Office in regards to the demotion of Police Chief Darryl Boykins.

Most, if not all, of the information found in the “confidential” paragraph has either previously or since been released by the Mayor through statements made to the media.

While the attached, “confidential” page does indicate several dates, it does not break down into precise times, of DePaepe’s alleged inappropriate conduct.

It insinuates that, “Any witnesses would be known to federal authorities as learned in their investigation,” but fails to specifically state if DePaepe is being investigated at all.

It also provides no specific information related to the details or circumstances of Karen DePaepe’s supposed conduct unbecoming a city employee, just vague references to a federal investigation into suspected felony violations of the federal eavesdropping and wiretap statute.

Finally, DePaepe has not been named as a suspect in those alleged crimes.