Does a chilly March mean a cool April and May?

NOW: Does a chilly March mean a cool April and May? 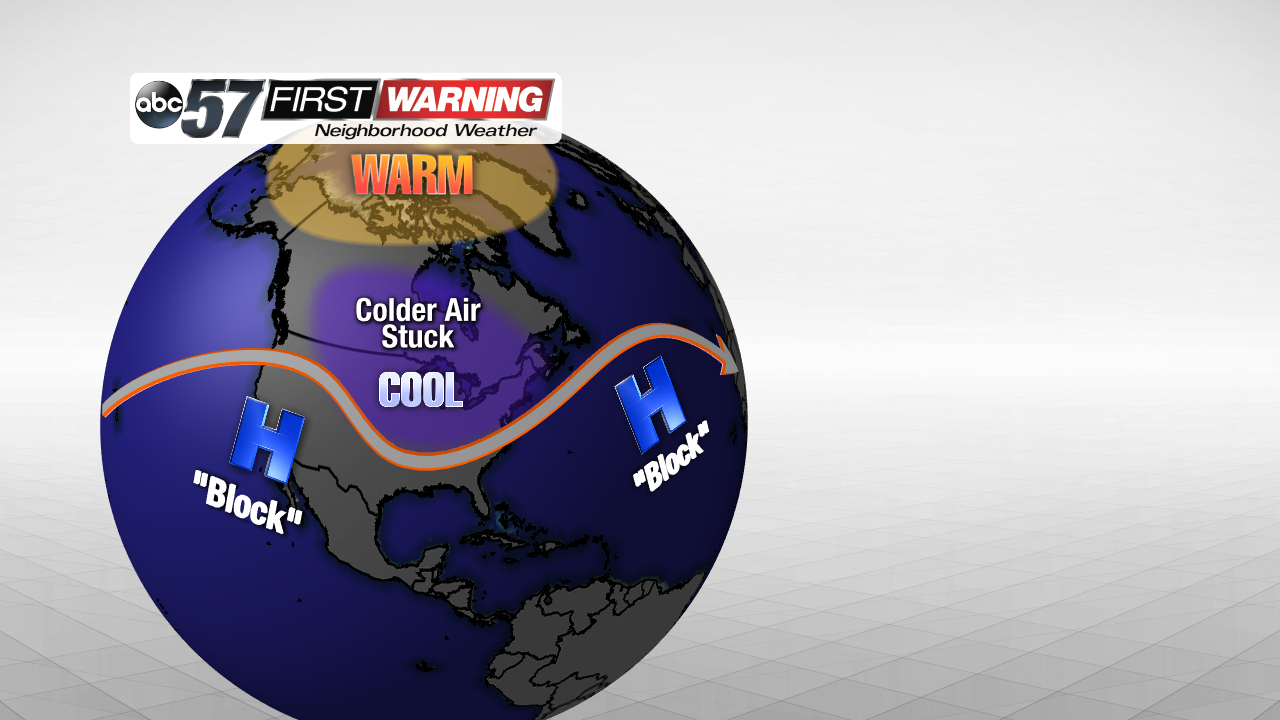 Pattern that has been in place and likely will continue to be in place for April.
March has seen plenty of chilly weather, with 19 of 28 days spent below average. There were even a few nights spent in the teens. The warmest temperature recorded in South Bend for the month thus far is only 55°! For perspective, each of the last four years has seen a temperature of at least 68° during the month of March. It is quite unusual to have a maximum March temperature in the mid-50s. Dating back to 1893, March of 2018 ranks as the 95th-warmest March ever in South Bend. In other words, we are experiencing one of the cooler March's on record. 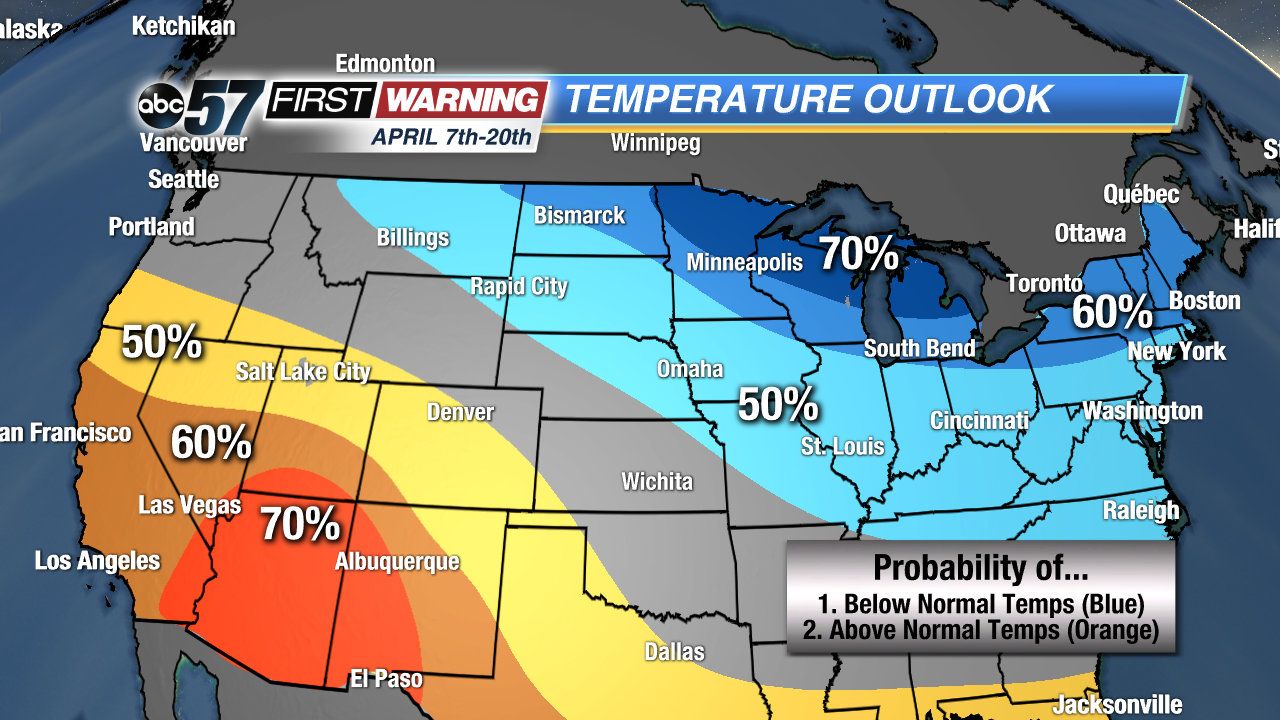 Temperature anomaly outlook for the period April 7th-20th.
Unfortunately, the pattern that has led to the cooler pattern doesn't look like it's going anywhere through April and even early May. Warmer-than-normal temperatures across the Arctic region have dislodged the colder air into Canada and parts of the Plains, Midwest, Great Lakes, Ohio Valley, and Northeast. Meanwhile, areas of high pressure and warmer temperatures have existed across the southwestern United States and the Atlantic Ocean. With this type of pattern, the colder-than-normal air gets "stuck" and essentially has nowhere to go. That's why northern Indiana and Michigan have seen so many days below average this month. 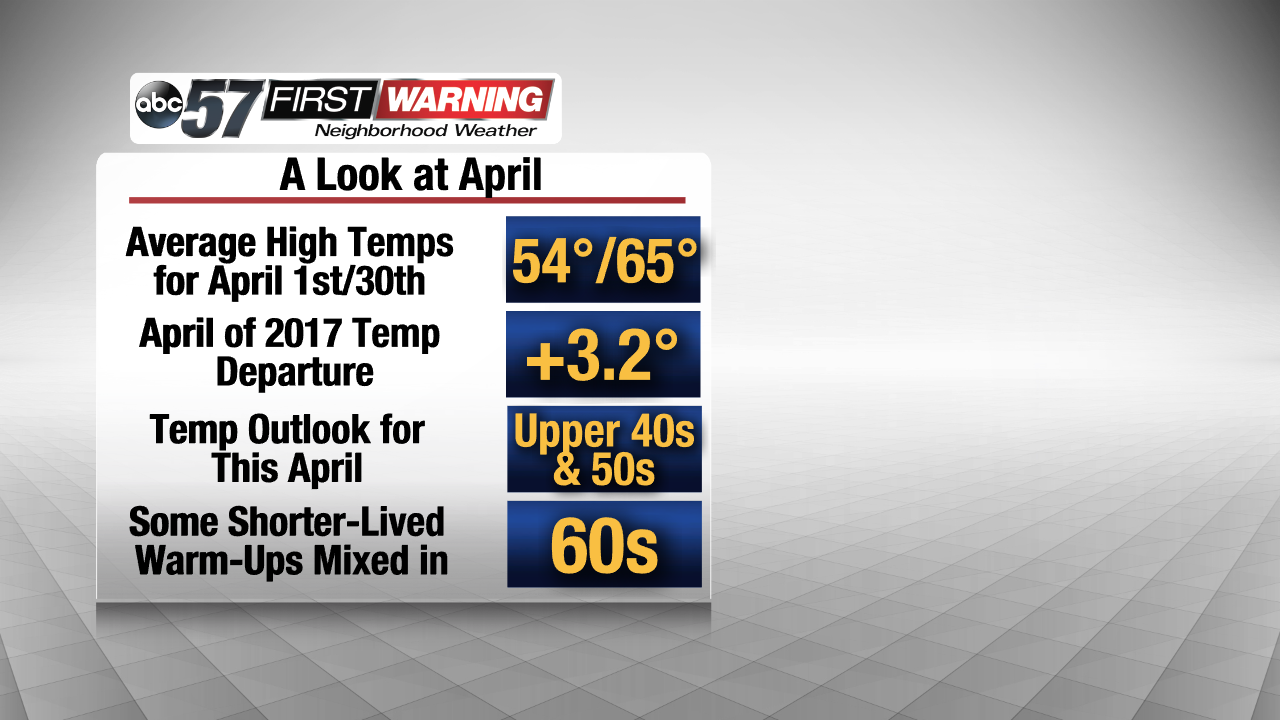 For April, the chances of cooler temperatures remain good. The Climate Prediction Center has all of Michiana in at least a 50-60% chance of below average temperatures through the 20th. However, looking even further the data suggest that colder-than-average temperatures may remain dominant into May! Of course, it's important to remember that April and May have average high temperatures ranging from the middle 50s to middle 70s. Thus, when the phrase "below average"  is used, it doesn't mean we will see January or February cold. Rather, it means afternoon highs will be below those norms. For April, there is a good chance that South Bend sees more days in the upper 40s and 50s as compared to days in the upper 50s and 60s.

For the first half of May, this translates to more days with highs in the lower and upper 60s as opposed to days with highs in the 70s. As is always the case with long-range forecasting, it's important to note that variables and patterns can change. As of now, though, nearly everything points to more days spent below normal than above normal through April and into early May.