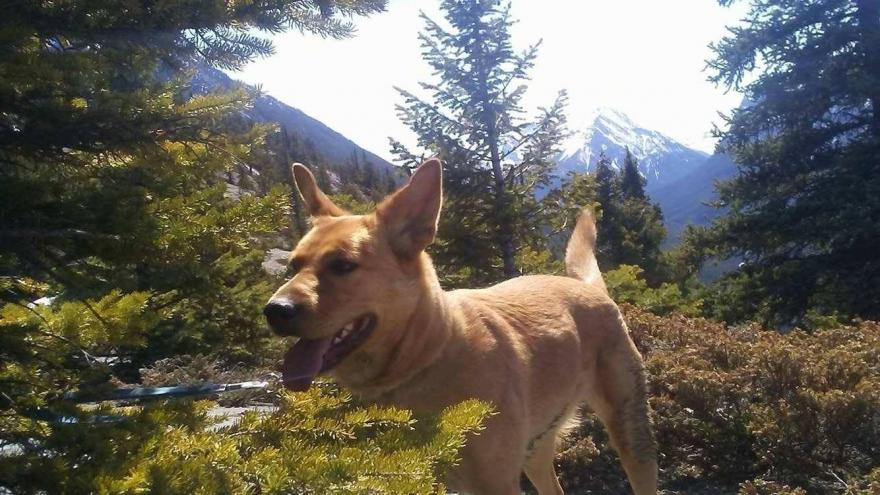 Now we know that everyone says about their pups (and they're right), but this shepherd-husky-lab mix enters an elite group of really good dogs after saving her friends from a grizzly bear in a Canadian park.

Kenzie Campbell says on Sunday he took Momo on a hike at Banff National Park in Alberta with his girlfriend and another friend.

They didn't get very far on the Cascade Ampitheatre Trail.

"We just made it to the trailhead and walked around a corner and the bear was maybe 20 feet away," Campbell said.

They backed slowly out of the woods, but the bear followed and charged.

"At this point, the bear was 15 feet from my girlfriend and the dog was barking and growling, so I let the dog go and she distracted the bear while we ran," he said. It took them about a half hour to make it back to the parking lot.

They called 911 on the way and Parks Canada emergency staff were there when they got there.

They scrambled into a truck and Campbell shot video of the bear, which had followed them and eventually wandered off.

Bill Hunt, a resource conservation manager with Parks Canada, says the hikers probably startled the bear, which is why it made a little charge. He says seeing the dog probably also upset the critter.

Hunt recommends hikers travel in groups, carry bear spay, make lots of noise and keep their dogs on leashes -- or better yet, leave them at home.

"She literally has hundreds and hundreds of encounter with people every summer," Hunt said. He says they have investigated the incident and don't think there's a risk to the public.

Momo was fine and got lots of praise and head scratches once everyone was safe.

Campbell is looking after Momo until the paperwork goes through for her to live with her owners, who just moved to Cardiff.

Samantha Emmons, Momo's owner, said it was scary to get the call, but she was glad the dog was there for her friends.

"She's a pretty protective girl so it doesn't surprise me," she said. "She [is] also the fastest dog at the dog park."

Campbell says Momo seems to be unfazed by their misadventure, but she might be a little spoiled from all the extra treats and love before she goes home in a couple of weeks.

"She is a little queen right now," he said.