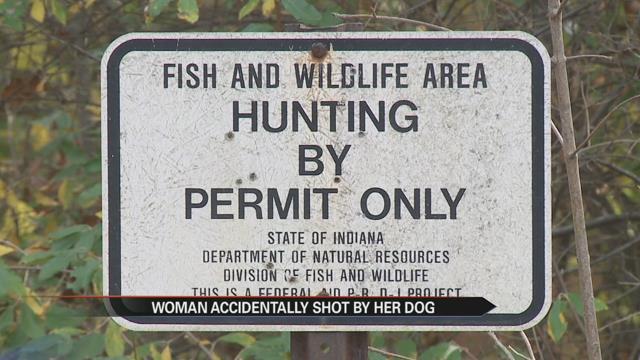 A woman hunting at the Tri-County Fish and Wildlife Area in Syracuse over the weekend was shot in the foot by her dog, whose name is Trigger.

“It was just an accident that occurred and just to serve as a stark reminder of some of the safety measures we should take,” Indiana Conservation Officer Jonathon Boyd said.

Boyd said authorities were called to the wildlife area Saturday morning around 10 a.m. because someone had been shot.

“A dog stepped on the trigger causing the gun to go off and strike a female hunter in the foot,” Boyd said.

That female hunter, 25-year-old Allie Carter of Avilla, put her 12-gauge shotgun on the ground without the safety on and her 10-year-old chocolate lab stepped on it, according to police.

Carter, who ABC57 tried to reach out to but did not get in contact with, was shot directly in the foot.

“Getting shot while hunting is very rare,” Boyd said. “But we do have a lot of rules out there to remind people how to be safe.”

Those rules include treating every gun as if it is loaded, always having the safety of the gun on and always pointing the muzzle of the gun in a safe direction, according to Boyd.

“It’s very important [to have gun safety training],” Marine veteran and lifelong shooter Deloren Thompson said. “From kids on up. if you’re going to have a gun, know the safety, and know how to use it when you use it.”

“That was more human error than anything,” Thompson said. “I’ve hunted with dogs and stuff before and never had problems.”

Thompson recommended training your dog, or having someone train your dog, before you take it out hunting.

Officer Boyd said there is a free class available for hunters, whether you’re a beginner or a veteran.

“Sign up for a free hunter education course,” Boyd said. “You can find those courses at dnr.in.gov.”

Authorities said Carter – who had not taken the hunter education course – was released from the hospital with minor foot injuries; her dog, Trigger, was not injured in the shooting.