Dog owner dies, wants dog euthanized so ashes can be mixed together 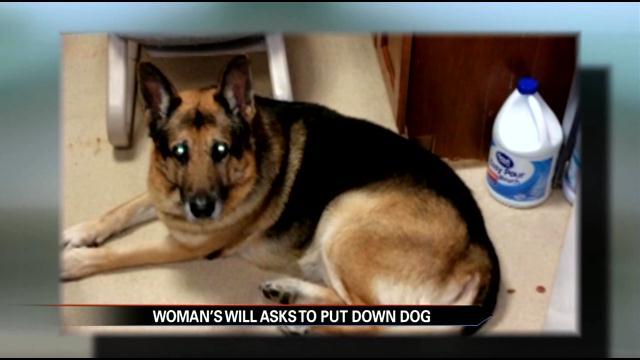 A woman wanted her ashes to be mixed with her beloved dog, Bella's ashes once she died so the pair could be together for the rest of eternity.

The only problem is the dog is still alive and owner Connie Lay has passed.

Bella the German Shepherd is being boarded in Dearborn County, and according to the will, Bella is to be put to sleep, and her ashes placed with Lay's.

Legal analyst Mike Allen says this isn't illegal or uncommon, but others like Derrick Embleton disagree.

“It's just not right. Every animal, person, any living thing has a right to live. It's life and they can't just end it because of somebody who thinks it's the right way for them," said Embleton.

Volunteers say several have offered to adopt Bella, but the executor of the will has the authority to carry out her wishes.

However, a second option in her will is to send Bella to Best Friends Animal Society in Angel Canyon, Utah.

If enough funds are raised, Bella will not be euthanized and placed in the shelter.