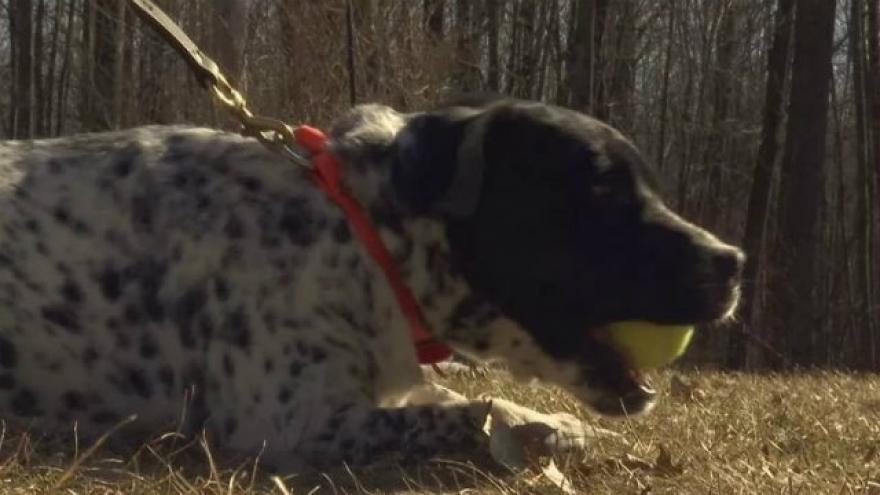 A Mid-Michigan dog who endured a life of abuse is getting a second shot at a happy life. Photo courtesy WNEM

Clare County, MI (WNEM) -- A Mid-Michigan dog who endured a life of abuse is getting a second shot at a happy life.

Remi was discovered last summer with severe injuries given to him at the hands of his former owner.

Now, he has a new place to call home. He has even found his true calling in life, a chance to become a police K-9.

Remi may look like your average dog, but his life has been anything but a walk in the park.

“Remi was tortured. He was tortured for days,” said Brian Gregory, president and owner of Northern Michigan K-9. “He had 13 stab wounds in his back, his shoulders, the backside of him. The quarter-inch of his nose was cut off. The tip was just completely cut off.”

Remi should have died with those injuries, but somehow he managed to escape his abuser.

He was rescued by the Clare County Animal Shelter last June. The person responsible for Remi’s abuse is now in prison.

Gregory said he is surprised by Remi’s friendliness, but even more surprised with his potential.

“He’s crazy for his toys and when dogs are crazy for their toys a lot of times you can get them to focus on that toy. You can train them to use their nose to detect things,” Gregory said.

Gregory said he is confident Remi has a bright future in detecting explosives.

“Most dogs would have never survived what he went through, but for some reason he did. He got away. He survived this horrific attack and now there’s a possibility that he’s gonna be able to move on and to help, to go out, use his talents to make this a safer place to be,” Gregory said.

While he is just a few days into the training program, Remi is eager for his new and improved life.

Gregory said Remi’s recovery would not have been possible if it weren’t for the Clare County Animal Shelter.

He wants Remi’s story to show others how important it is to donate to local shelters because without them, many times pets in these types of situations would not be as fortunate as Remi.