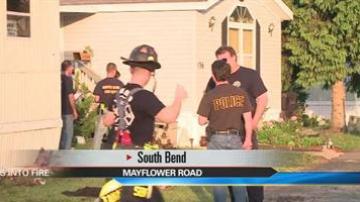 SOUTH BEND, Ind. -- A domestic dispute escalated from an argument to a house fire Wednesday night. The victim, who didn't want to speak on camera, said her husband tried to burn down their trailer.

The call went out as a domestic dispute around 6 p.m. Wednesday.

Police showed up and separated the two. They told the husband to go inside while they spoke with his wife outside.

That’s when police say things got out of hand.

“They could see smoke start to come from the ceiling, from the outside,” South Bend Police Sergeant Charles Stokes said.

Police say the husband then barricaded himself inside the trailer.

“They ordered him out several times he refused to come out,” said Sergeant Stokes.

“He put bullets into the microwave which exploded. So the officers called in for more units to come for backup,” Stokes said.

Police say it is a miracle no one was killed or seriously injured.

“That could have been very dangerous that’s why the officer wouldn’t make entry until he got back up. Because you’ve got bullets exploding and we don’t know what he used to start the fire. But as you can see from the damage to the trailer it burned quite a bit,” said Sergeant Stokes.

That husband has been charged with resisting law enforcement and felony domestic.