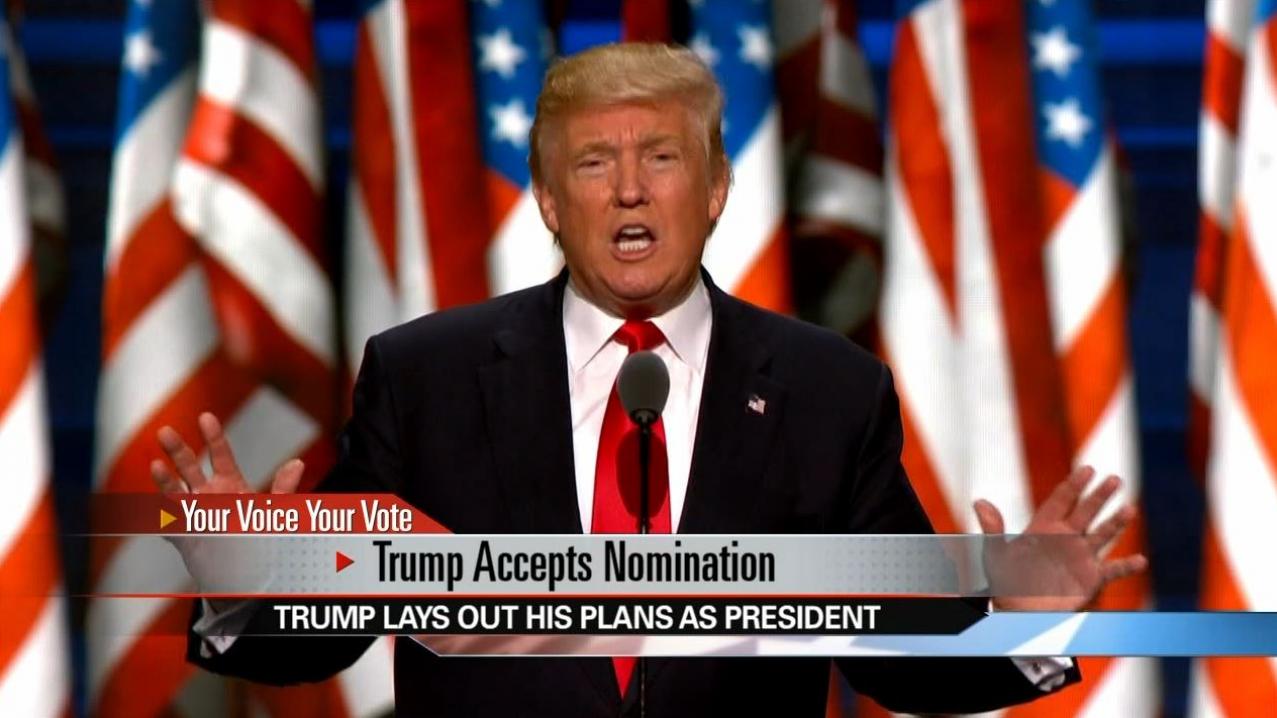 CLEVELAND (CNN) -- Donald Trump conjured a dire picture Thursday of an America sliding deeper into poverty, violence and corruption and declared himself the only person who could avert disaster.

Accepting the Republican nomination in Cleveland, the billionaire twice pledged to be a "voice" for working Americans, restore law and order and to confound elites and doubters by winning the White House in November.

"Nobody knows the system better than me, which is why I alone can fix it," Trump said. "My message is that things have to change -- and they have to change right now."

Trump, whose unpredictable campaign has broken every rule of politics, portrayed America as a broken nation that only he can fix.

"I have a message for all of you: the crime and violence that today afflicts our nation will soon come to an end," he said. "Beginning on January 20th, 2017, safety will be restored."

Trump's lengthy address --- clocking in at one hour and 15 minutes --- was the most crucial moment yet in his transformation from a brash tycoon and reality star with a sometimes vulgar tongue to a politician on the cusp of the presidency with an expansive vision of disruptive change. Trump took the opportunity to attempt to soothe divisions in both the country as a whole and his party, where tensions were exposed Wednesday by Ted Cruz's refusal to endorse Trump.

Trump took the opportunity to attempt to soothe divisions in both the country as a whole and his party, where tensions were exposed Wednesday by Ted Cruz's refusal to endorse Trump.

"Our convention occurs at a moment of crisis for our nation. The attacks on our police, and the terrorism in our cities, threaten our very way of life," he said. "Any politician who does not grasp this danger is not fit to lead our country."

Ivanka Trump introduced her father on the biggest night of his political life.

The evening included historic moments. Tech billionaire Peter Thiel became the first platform speaker ever to tell the Republican National Convention that he was proud to be gay.

Trump pledged as President to protect LGBT Americans, referencing last month's attack on a gay nightclub in Orlando. As the crowd cheered, Trump departed from his prepared speech and said, "As a Republican, it is so nice to hear you cheering what I just said."

Clinton responded during the speech with a tweet saying, "We are better than this."

Trump's acceptance of the Republican nomination represents a stunning moment in American political history --- as the outsider who overturned the Republican establishment leaves Cleveland with his sights firmly on the White House.

His address barely touched on the issue of Republican disunity that plagued much of the 2016 convention -- culminating in Cruz's dramatic speech Wednesday. Instead, he outlined a broader and loftier argument to millions of Americans watching at home, seizing his best chance yet to present himself as possessed of the qualities and sobriety demanded of a President.

The GOP nominee drew on recent ambushes of police in Dallas, Baton Rouge, Louisiana, and elsewhere to bemoan "violence in our streets and the chaos in our communities."

He portrayed himself as the strongman who could crush the violence.

"When I take the oath of office next year, I will restore law and order to our country," he will say.

Trump's campaign chairman, Paul Manafort, was asked by CNN's Jake Tapper why Trump was playing up fears of rising crime even though FBI statistics show crime is in decline.

"People don't feel safe in their neighborhoods. I'm not sure what statistics you're talking about," Manafort said, and then took a swipe at the Bureau over its decision not to seek charges against Clinton over her email server.

"The FBI is certainly suspect these days after what they just did with Hillary Clinton," he said.

"She lied, over and over and over, she lied," Priebus said, accusing the former first lady of "perfecting the art of politics for personal gain."

"For Hillary Clinton, the Oval Office is just another cash cow," he said.

Hitting the theme of illegal immigration that sent his campaign rocketing toward the nomination, Trump said nearly 180,000 undocumented immigrants with criminal records are roaming the country.

"We are going to build a great border wall to stop illegal immigration, to stop the gangs and the violence, and to stop the drugs from pouring into our communities," Trump said.

Turning to a destabilized world, Trump said Americans were far less safe than when Obama took office and made Clinton his secretary of state.

He claimed America had been thrust through "one international humiliation after another," recalling images of U.S. sailors captured by Iran. ISIS is marching across the Middle East, Libya is in ruins, Iran is on the path to nuclear weapons, and Iraq is a mess, he said.

He warned of the "barbarians of ISIS," conflated "brutal Islamic terrorism" in France with attacks in San Bernardino, Texas, Boston and Orlando.

Trump argued that many of the world's travails could be blamed on Clinton.

"Her bad instincts and her bad judgment -- something pointed out by Bernie Sanders -- are what caused so many of the disasters unfolding today," he said. "This is the legacy of Hillary Clinton: death, destruction terrorism and weakness, but Hillary Clinton's legacy doesn't have to be America's legacy."

When the crowd started chanting, 'Lock her Up! Lock her Up!" Trump first nodded, then shook his head. "Lets defeat her!" he said, drawing huge cheers.

He also renewed his softened-but-still-strident line on Muslim immigration, promising to immediately suspend entries from any nation that has been compromised by terrorism until vetting could be put in place.

A day after casting doubt on NATO security guarantees in a New York Times interview, Trump vowed foreign nations would be asked to pay for their "fair share" of mutual security burdens.

Only a change in leadership will fix the mess at home and abroad, he said.

"There can be no prosperity without law and order," Trump said, promising to create millions of new jobs and trillions in new wealth once once special interests he said favored Clinton had been destroyed.

"She is their puppet, and they pull the strings," he said.

Trump also slammed Clinton over her private email server, saying the fact she escaped charges showed "corruption has reached a level like never before."

"Her single greatest accomplishment may be committing such an egregious crime and getting away with it -- especially when others, who have done far less, have paid so dearly," he said.

Trump didn't just castigate Clinton, however. He turned on an old foe, Obama, as well, accusing the President of dealing in "irresponsible rhetoric" and dividing America by race and color.

'I am your voice'

He portrayed himself as the champion of the forgotten men and women of America who work hard but were ignored by elites.

"I am your voice," Trump said.

In a rare moment of humility, Trump thanked the evangelical community.

"The support they have given me, and I am not sure I deserve it, has been amazing," Trump said.

And he praised Ivanka and his wife, Melania, for their speeches, asking the crowd, "Did they do a job?" -- his only indirect reference to the plagiarism controversy that overshadowed the first two days of the convention.

Hitting a populist note, Trump vowed to renegotiate "terrible" trade agreements with China. Getting unusually specific, he promised tax relief, a national program to build highways, airports roads and to rebuild the military.

"It is time to show the whole world that America Is Back -- bigger, and better and stronger than ever before," he said.

In an unusually personal interlude, Trump paid tribute to his wife Melania and children, reflecting on how proud his father Fred would have been to see him as a presidential nominee and lauded him for his respect for working people and the "dignity of work."

He ended with a warning to all the naysayers who thought he would never win the GOP nomination and still believe he cannot win the presidency.