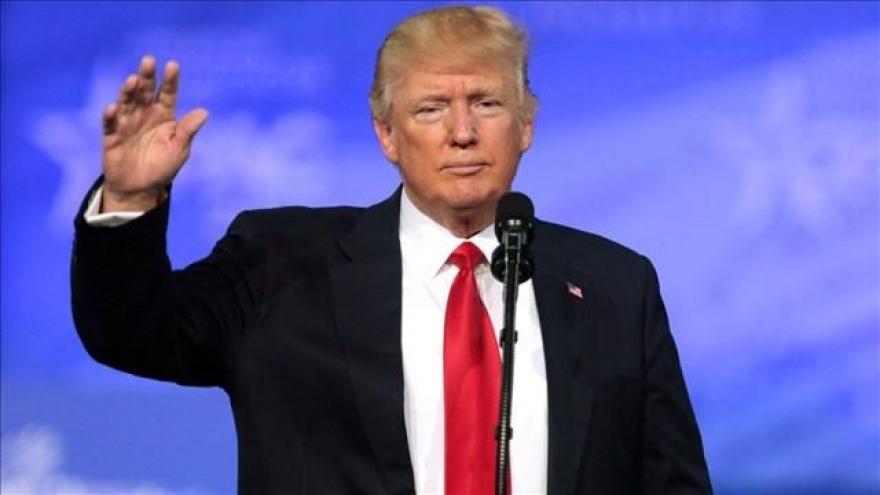 (CNN) -- The contrast couldn't have been more stark. In Washington, journalists celebrated the First Amendment (and themselves) at a glitzy and ritzy dinner. In Harrisburg, Pennsylvania, the President of the United States delivered up slabs of red-meat to some of his most loyal supporters who had gathered to celebrate his first 100 days in office.

It was the split-screen image that President Donald Trump wanted, a living, breathing testament to just how out of touch the "elites" in Washington really are and how he remains, despite all the barbs thrown at him by those elites, beloved among real Americans.

"As you may know there's another big gathering taking place tonight in Washington, D.C. Did you hear about it?" Trump asked the crowd in Harrisburg. "A large group of Hollywood actors and Washington media are consoling each other in a hotel ballroom in our nation's capital right now. They are gathered together for the White House correspondents' dinner without the President. And I could not possibly be more thrilled than to be more than 100 miles away from (the) Washington swamp spending my evening with all of you and with a much, much larger crowd, and much better people."

And in Washington, comedian Hasan Minhaj, who delivered the big speech of the night at the correspondents' dinner, played right into Trump's hands with a searing excoriation of the President's first 100 days. It was well-received in the room -- because it was funny! -- but will just add fuel to the fire Trump has been stoking almost since the day he entered the presidential race.

That message is this: Elites in Washington (and Hollywood and every other big city in the country) think you are dumb. That you are "out of touch." That you don't get it. But what they don't get is you are the majority. You are the hardworking people who might not talk on TV or wear tuxedos to fancy dinners, but who have always comprised the backbone of our country.

The split screen between the White House correspondents' dinner and Trump's Harrisburg speech was, then, a fitting encapsulation of Trump's first 100 days. He has struggled mightily to adjust to the challenges of being president, seeming flummoxed by his inability to simply tell Congress (or the judiciary) what to do and have them immediately carry out his orders. But even as he flails in his effort to make Washington work for him, his most die-hard supporters remain totally and completely in his corner, committed to the belief that even when he swings and misses, Trump is more in tune with their interests than any other politician.

For the moment, Trump seems entirely content with that dichotomy. As long as he can hold a rally like the one in Harrisburg on Saturday night where loving crowds cheer his every word, he believes he is succeeding.

But, whether Trump likes it or not, he will need to learn to play the Washington game far better in his next 1,000 days than in his first 100 days if he wants to a) get things done or b) put himself in position to be re-elected in 2020.

The realities of political Washington are that Trump will need some Democrats to support things like his tax reform proposal or his health care legislation if he wants them to have a chance of passing. And, speeches like the one he gave Saturday night in Harrisburg do nothing to begin building those across-the-aisle bonds.

Everyone loves to hear people applaud for him or her. And every politician knows a good scapegoat when they see one. But savaging Washington "elites" and calling real news "fake" has its limits as a political strategy. Trump, at some point over the next 1,000 days, will need some actual accomplishments that go beyond signing executive orders in photo ops at the White House. He'll have to demonstrate that his campaign promises of fixing Washington's broken systems weren't just empty rhetoric.

And so, Trump's split-screen moment may have worked for him on Saturday night, but that's a single battle in his presidency, not the broader war. And he still seems entirely oblivious to the fact that politics isn't simply telling the people who support you what they want to hear. It's finding ways to convince the people who don't support you why they should.