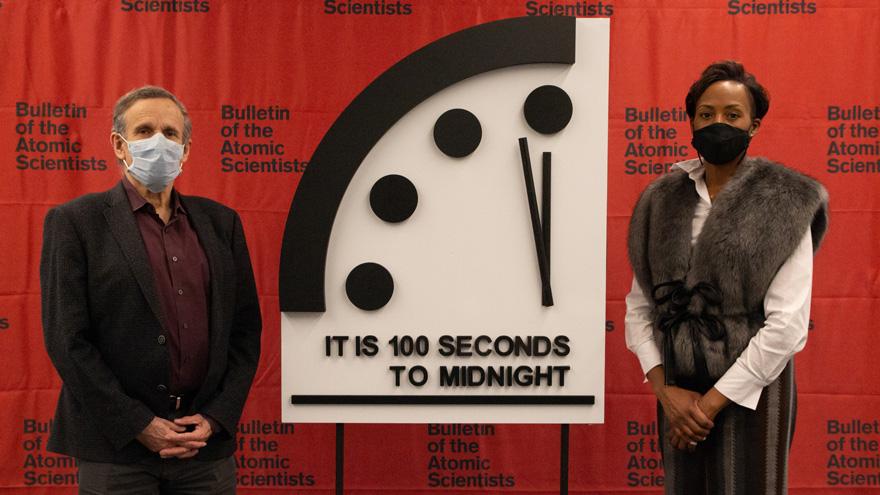 The Bulletin of the Atomic Scientists has left the Doomsday clock unchanged this year - we are still at 100 seconds to midnight. The report recognizes the ongoing nuclear threat and climate change, but also mentions the dangers of “conspiratorial nonsense” that undermined the ability of leaders to keep citizens safe during the pandemic.

The Doomsday clock signifies the world’s vulnerability to catastrophe, or closeness to the apocalypse, which is represented by midnight on the clock.

Last year the clock was set at 100 seconds to midnight. It remains unchanged this year.

Click here to read the full statement about this year’s current time.

Excerpt from the statement:

Humanity continues to suffer as the COVID-19 pandemic spreads around the world. In 2020 alone, this novel disease killed 1.7 million people and sickened at least 70 million more. The pandemic revealed just how unprepared and unwilling countries and the international system are to handle global emergencies properly. In this time of genuine crisis, governments too often abdicated responsibility, ignored scientific advice, did not cooperate or communicate effectively, and consequently failed to protect the health and welfare of their citizens.

As a result, many hundreds of thousands of human beings died needlessly.

Though lethal on a massive scale, this particular pandemic is not an existential threat. Its consequences are grave and will be lasting. But COVID-19 will not obliterate civilization, and we expect the disease to recede eventually. Still, the pandemic serves as a historic wake-up call, a vivid illustration that national governments and international organizations are unprepared to manage nuclear weapons and climate change, which currently pose existential threats to humanity, or the other dangers—including more virulent pandemics and next-generation warfare—that could threaten civilization in the near future.

As we noted in our last Doomsday Clock statement, the existential threats of nuclear weapons and climate change have intensified in recent years because of a threat multiplier: the continuing corruption of the information ecosphere on which democracy and public decision-making depend. Here, again, the COVID-19 pandemic is a wake-up call. False and misleading information disseminated over the internet—including misrepresentation of COVID-19’s seriousness, promotion of false cures, and politicization of low-cost protective measures such as face masks—created social chaos in many countries and led to unnecessary death. This wanton disregard for science and the large-scale embrace of conspiratorial nonsense—often driven by political figures and partisan media—undermined the ability of responsible national and global leaders to protect the security of their citizens. False conspiracy theories about a “stolen” presidential election led to rioting that resulted in the death of five people and the first hostile occupation of the US Capitol since 1814.

Considered by themselves, these negative events in the nuclear, climate change, and disinformation arenas might justify moving the clock closer to midnight. But amid the gloom, we see some positive developments. The election of a US president who acknowledges climate change as a profound threat and supports international cooperation and science-based policy puts the world on a better footing to address global problems. For example, the United States has already announced it is rejoining the Paris Agreement on climate change and the Biden administration has offered to extend the New START arms control agreement with Russia for five years. In the context of a post-pandemic return to relative stability, more such demonstrations of renewed interest in and respect for science and multilateral cooperation could create the basis for a safer and saner world.

Because these developments have not yet yielded substantive progress toward a safer world, they are not sufficient to move the Clock away from midnight. But they are positive and do weigh against the profound dangers of institutional decay, science denialism, aggressive nuclear postures, and disinformation campaigns discussed in our 2020 statement. The members of the Science and Security Board therefore set the Doomsday Clock at 100 seconds to midnight, the closest it has ever been to civilization-ending apocalypse and the same time we set in 2020. It is deeply unfortunate that the global response to the pandemic over the past year has explicitly validated many of the concerns we have voiced for decades.

We continue to believe that human beings can manage the dangers posed by modern technology, even in times of crisis. But if humanity is to avoid an existential catastrophe—one that would dwarf anything it has yet seen—national leaders must do a far better job of countering disinformation, heeding science, and cooperating to diminish global risks. Citizens around the world can and should organize and demand—through public protests, at ballot boxes, and in other creative ways—that their governments reorder their priorities and cooperate domestically and internationally to reduce the risk of nuclear war, climate change, and other global disasters, including pandemic disease.

We have experienced the consequences of inaction. It is time to respond.

What action is needed, according to their report?

We set the Doomsday Clock at 100 seconds to midnight—the closest it has ever been—because the existential risks confronting humanity today call for quick and comprehensive action across the 21st century’s complex threat spectrum. Here are some practical steps that world leaders can and should initiate in 2021 to protect humanity from major global threats that have the potential to end civilization: