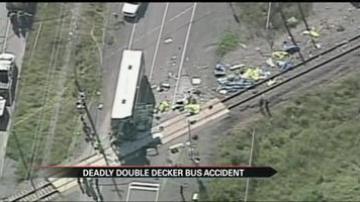 OTTAWA, Ontario -- Six people were killed and dozens more were injured when a double-decker bus crashed into a train.

It happened Wednesday morning in Canada's capital of Ottawa.

Witnesses say the bus full of passengers went through a lowered crossing gate crashing into the train.

First responders on the scene told CTV there were bodies and debris everywhere.

At least 31 people were injured about half of them critically.

It has been confirmed that the driver of the bus died in the accident and authorities there are saying it is too early to tell what caused it.