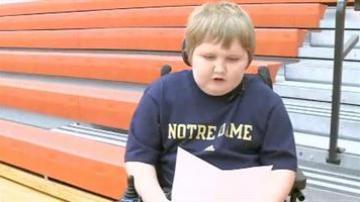 DOWAGIAC, Mich.--A Dowagiac boy is dreaming big. His plea for a ticket to the BCS championship game has gone viral.

"Hello, my name is Blake Dudley. I am 14. I go to Dowagiac Middle School in Michigan. It would mean the world to me if my mom, my brother and I could come to Miami and watch Notre Dame play in the BCS championship game," read Dudley aloud.

As you can tell, this Notre Dame fan is bashful, so he took to writing this letter to ask for something most kids could only dream about. But Blake's no stranger to fighting the odds. He was born with Duchenne muscular dystrophy that put him a wheelchair three years ago. And if he's missing out, it's only because he'd rather watch the Irish.

"There was this game at 9 o'clock in the morning that I wanted to make sure I got up to see," said Dudley, an eighth-grader. "And I could have went trick -or-treating, but there was a game on so I watched that instead."

He even considered cashing in things around his house!

"He goes, 'Do we have anything valuable around here tha. we could sell?' "and I said 'No, why?'" said Blake's mother Celeste Dudley. "And he said, 'Because I really want to go to that game.'"

So much so that he made it easy to contact him. He put all important numbers at the bottom of that viral letter so his mom can't even get a half an hour of peace.

"I can't go 30 minutes without an email, a text message, a phone call, something on Twitter, something on Facebook, it's just been crazy."

So crazy that one local high schooler who didn't even know Blake started making t-shirts and selling them for $10.

"The front says 'Get Blake to South Beach' and the back is a quote from his letter that says 'It would mean the world to me,'" said Maggie Cripe, senior at Dowagiac High School.

His family hopes someone will hear his story and help him score the trip of his dreams.

"He's just such a good person," said Nathan Michael, Blake's step-brother. "It's sad that he can't do everything else that everyone else can. He really never looks down upon himself. He's always, 'Well if I can't do that, I'll try and do something else.'"