Dowagiac custodian heads back to work after shooting 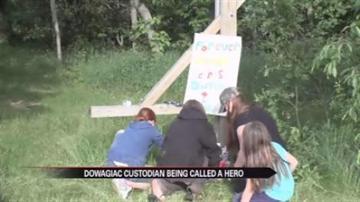 DOWAGIAC, Mich.-- Custodian Jennifer Grindstaff says she did what anyone else would have done: followed her gut instinct when she spotted a boy hiding across from Dowagiac Middle School parking lot in the woods.

Once inside, Grindstaff quickly found the principal who then watched surveillance video. She says the video showed the boy near the dumpsters with a hand gun. After alerting police, the principal placed the district's schools on lock-down and halted the buses from arriving.

Thirteen-year-old Darren Price shot himself in the woods and later died at the hospital.

"I'm glad nobody else got hurt, but I'm sad that he had to take his own life," said Grindstaff.

Stuffed animals and a cross now sits at the opening in the woods where the custodian first spotted Price. Former classmate Breanna Bannow and friends left them in remembrance of him because he struggled with constant bullying.

She wants others to remember that her classmate tried his best to cope with the bullying.

"No matter how much he got picked on--he was always fun to be around," said Bannow.

Extra police officers and counselors were on hand at the school Tuesday. Few details are known about Price's motives, his family or school life. Police say Price got the gun from his Dowagiac home. The weapon had three rounds, including the bullet that took his life.