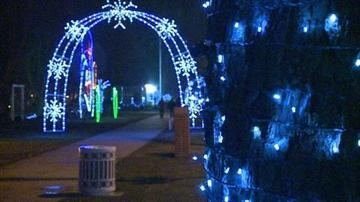 ST. JOSEPH, Mich. – A predator is lurking in the dark wooded areas along the railroad that cuts through the city of St. Joseph. The hunter is stalking its prey along the edge of the popular downtown Lake Bluff Park, waiting for the right moment to strike and make off with its next meal.

On at least two occasions the St. Joseph Police Department has received reports that coyotes have been spotted along the bluff during the early morning hours.

Lake Bluff Park is a favorite for runners and dog-walkers at all times of day, and the coyotes in the area have picked up on that fact.

Their tracks can be seen in the snow, staying just beyond the ridge; hidden by brush. But their silent stalking can be deadly for an unwary pet owner out for their morning stroll.

Coyotes rarely attack a full grown person, but they won’t hesitate to pick off a small dog on a leash next to one.

St. Joseph police know this is one predator they are unable to catch, so they’ve called in an expert.

Jim Scheffield has decades of trapping experience. He is also the owner of Awesome Critter Gitters based in Niles.

The city has asked Scheffield to capture the coyotes alive, and they would like him to use a cage to do so.

But that may not be so easy. Scheffield explains that coyotes are often too smart to fall for a cage trap. “The coyotes have walked up to them, walked around them,” said Scheffield. “They don’t like to be crowded, so it’s really hard to get them inside that cage.”

Scheffield would like to use a non-lethal version of a snare trap called a collarum. The collarum throws a loop over the head of the animal and then draws the cable around the neck of the animal.

Unlike other snares though, the collarum has a safety feature that prevents animals from tightening the cable too much and harming themselves. The relaxing locking mechanism holds the cable in place as if the trapped animal was on a leash.

Scheffield would also like to place his traps in more strategic areas, but he has run into problems with getting permission from land owners to do so.

Currently Scheffield estimates one coyote is frequently hunting along the park’s edge. But he warns, winter is coming and that can make for hungry coyotes. “There’s going to be more. There’s never one coyote. There’s always more behind it,” said Scheffield.

Scheffield offered some tips for if you find yourself crossing paths with a coyote and have a small pet in danger.

First, pick your pet up. Coyotes are deceivingly fast and will snatch a small dog or cat quickly if given the chance.

Second, do not make eye contact with the animal yet and don’t try to run away. If the coyote senses your fear, it may become brave enough to try and take your pet out of your arms.

Third, quickly find something big and heavy to swing at the coyote, only then should you turn to face it.

Finally, once armed, charge the coyote aggressively. Screaming and yelling are encouraged, and don’t stop advancing until the coyote is gone.

Scheffield advised that if faced with more than one coyote, most of the same steps should be followed. However, he suggests also finding an escape route that will allow you to climb out of the coyote’s reach.

Facing several coyotes at once can be an intimidating prospect warned Scheffield. The first step to staying safe is keeping calm.