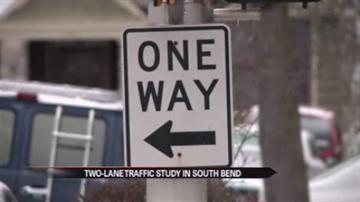 SOUTH BEND, Ind. -- A traffic study is being done to determine whether or not the city of South Bend should change traffic on certain streets from one-way to two-way in downtown. Residents had mixed opinions on the idea.

The city has hired DLZ to do a traffic study on Saint Joseph, Main, Lafayette, and Williams streets. The study is looking at the capacity of the roads and the traffic counts to determine if changing the roads from one-way traffic to two-way traffic is a good idea.

Ian Shelton who walks around and works in downtown says two way streets might be easier to navigate, but thinks the roads are fine now.

"I think the one way streets that we have downtown run pretty smoothly the way they are,” said Shelton.

Jackie Bauer of Made in Michiana thinks having two-way traffic would help business.

"I think that's long overdue. It's the best thing they could do to bring people downtown and build our business,” said Bauer.

Bauer is always hoping for more people to pop in to buy paintings or jewelry at Made in Michiana. She thinks two way streets would do it.

"That's the biggest thing that stops them coming down here is the one way streets. They get confused they can’t get to where they're going. And then parking is  a problem and they just avoid it,” said Bauer.

Just a few blocks over, Tyrone Miller of Wild Style Wings thinks it would get more people off the streets and into his seats while they’re open for business.

"Well I think it’s a great thing. The traffic going in both directions it's a little safer for one and also it would give businesses on both sides of the street equal opportunity,” said Miller.

The study’s results are expected to come back in early February.