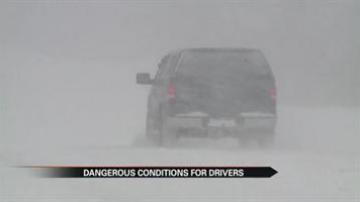 BERRIEN COUNTY, Mich.-- Lake effect snow and high winds are making driving conditions hazardous. Plow trucks worked tirelessly clearing drifting snow from US31 on Saturday, and low visibility made it difficult to see the car in front of you.

US31 ramps were very slippery, and police have been responding to several slide-offs.

Drivers were forced to slow down due to the whipping winds and low visibility.

Renee Ruth said, “It was really windy and the snow was drifting so it was pretty bad.”

Angela Garcia said she tried to pump gas but it didn't work.

Garcia said, “I just tried to pump some gas, and the gas pump is frozen. It’s so cold, it’s very snowy and there’s a lot of snow everywhere."

Although many people in Michiana saw sun, you could drive just a mile away and be caught in blizzard-like conditions.