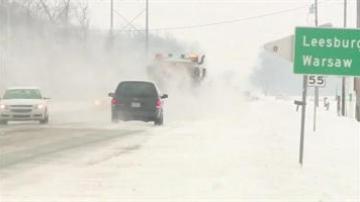 KOSCIUSKO COUNTY, Ind. -- When wind gusts pick up and there's nothing to stop the snow from blowing onto the roadways, it can become impossible to see in near white-out conditions. It also makes it more likely for a driver to come upon slick spots like black ice and slide off of the road.

“When we get another dump of this snow like we did last night, it coats over top of somewhere that’s got a black ice effect, so it can be very dangerous for drivers who might not know what’s under that top layer of asphalt,” Sergeant Chad Hill of the Kosciusko County Sheriff's Department.

Snow and wind together are one dangerous combination in Kosciusko County. Because of the wide open spaces and lack of hills, the snow has nowhere else to go, but back across the roadways when winds pick up.

“In particular right here between Milford and Leesburg area and directly south of Nappanee we have constant slide-offs or wrecks and quite a bit of the time we actually have zero visibility basically on this stretch of the roadway,” Hill said.

John Glon has been in the towing service for 35 years here in Indiana, and he says with more snow coming earlier this winter, he's been busier than he usually is this time of year.

“Everybody always says well this is the busy time of year, but not always. I prefer to tow cars when it’s 70 degrees myself,” Glon said.

Glon agrees that northern Kosciusko County sees some of the worst drifting in Michiana because of the flat terrain.

“Even when the main roads are plowed, if it’s drifting really bad, yes they plug up again and there’s low visibility and so forth. When you can’t see as well that’s when you have problems,” Glon said.

A lot of the slide-offs he runs into are due to drivers not slowing down until it's too late.

“Sometimes you don’t realize it’s that slick until you hit those icy patches,” Glon said.

Many county highway departments in Michiana had road crews out at 4 a.m. through the evening hours Tuesday to treat the roads.