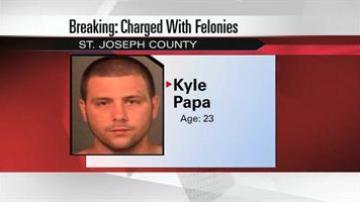 ST. JOSEPH COUNTY, Ind. -- One person has been charged related to the death of Amanda Ezra who was killed after sticking her head out a minivan window.

According to the probable cause affidavit, Osceola Police officers were dispatched to the area of 300 Chestnut at 4:40 a.m. Sunday.

When they arrived, they found a minivan on the side of the road and the body of Amanda Ezra in the grass next to the minivan.

Two of the occupants of the minivan, Kyle Papa and Brandon Bowers, had fled the scene, and two remained behind with Ezra.

The two who stayed behind were identified as Antonio Niles and Austin Earley.

Niles and Earley said all five had been at a party at a home on Chestnut.

All five left in the minivan Ezra owned and Papa was driving, according to the affidavit.

Niles told police he was in the front seat and Ezra was on his lap.

Papa realized he turned the wrong way and went quickly around a cul-d-sac, overshot the curve and drove into the grass.

As he did this, Ezra was leaning out the window to vomit.

As Papa drove into the grass, Ezra's head struck a utility pole.

Niles told Papa to stop the vehicle and after driving a block, he did.

Earley called 911 and heard Papa say, "I've got to get out of here," according to the affidavit.

Papa and Bowers both allegedly left the scene.

After a short time, an officer located Papa and Bowers in a minivan at a gas station not far from the accident scene.

Officers noticed Papa smelled like alcohol, had red, bloodshot eyes, slow movements, slurred speech and decreased dexterity. His BAC was .163, according to the affidavit.

When he was arrested, Papa had a green leafy substance on his person that later field tested positive for marijuana.