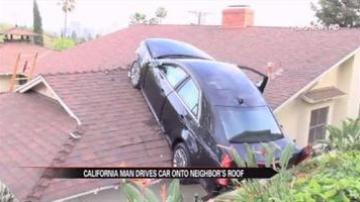 CALIFORNIA — A homeowner's roof became a parking space when a neighbor lost control of his car.

The elderly driver told police that he and his wife were driving down their steep driveway when a mechanical issue caused him to lose control.

The car sped across a neighbor's front lawn and came to rest on the roof of a lower house.

Neighbors told police that this is the second time the elderly driver has crashed into a neighboring house.