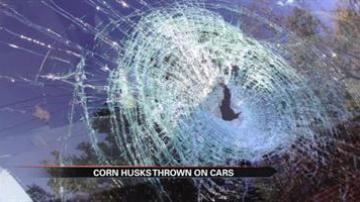 LAPORTE COUNTY, Ind.--Indiana State Police officers responded to almost a dozen calls along the toll road in LaPorte County late Monday night. Someone was tossing bushels of corn off the side of an overpass onto cars below.

Drivers, who pulled off along the roads, described themselves as shaken up and covered in shards of glass.

It happened near mile marker 58 on the Indiana Toll Road.

"It sounded like a bomb and I really thought it was chunks of the overpass falling off," said Labriola, who was traveling from Ohio to Chicago.

In less than a second, her front seat was covered in corn kernels and chunks of windshield glass.

"I'm just fortunate that it hit the passenger side," said Labriola. "If it hit the drivers side I would have probably been cut up from all of the glass and I would have definitely lost control."

Pictures of Labriola's windshield, taken right after it happened, show glass and hardened corn kernals all over her vehicle.

According to police, she wasn't the only driver scrambling for a windshield replacement.

Troopers responded to almost a dozen other drivers with similar situations.

"Apparently mine got the brunt of it though because they must have just decided that they were done and they just dumped a whole bushel or bucket or whatever," said Labriola. "It was like an explosion and it's still on the side of the road as you drive by there today."

It's something that has happened much too often in this area of La Porte County, but the suspect is always gone before police arrives.

"It's insane," said Labriola. "It happens all of the time too and it's pathetic that they don't know what they're doing but its attempted murder in my opinion."