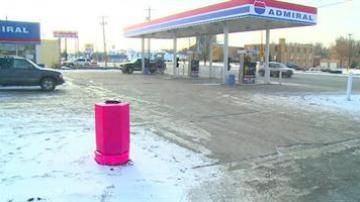 ST. JOSEPH COUNTY, Ind. -- Drivers are upset about a road hazard at the Admiral gas station on 933 in St. Joseph County. The base of an old light pole is sticking up so high, it has damaged several cars.

"I exited from pump one getting gasoline and came to the exit to exit onto the side road," said Elizabeth Ullery.

That's when she ran over the old post and damaged her vehicle's undercarriage.

"I totally freaked out. There were fluids-every fluid that could be in a car was flowing out of the car. This is a company car that belongs to my best friend," said Ullery.

Ullery showed us photos of the damage and her own bruises.

"I got stuck and my arm slammed into the steering wheel," said Ullery.

She added the snowfall hides the hazard.

"You got cold you got weather, you got short people like me that are driving like this and so sometimes you don't see something like that and it really should be removed or marked with cones," said Ballard.

She confirmed off camera the concrete block has been there for a year and a half.

She says many people have had run-ins with the post.

Now these drivers are wondering what's taking so long to fix it.

"This is not an isolated incident. That's what really makes me angry. They've said this has happened frequently. It's happened enough times that this is their solution. Really? If I ran my business that way I would be out of business," said Ballard.

After calling the police on ABC57, the manager spoke with us and said they are working to fix the problem.

She said most of the people who hit the block are "texting, drunk, high or not paying attention."