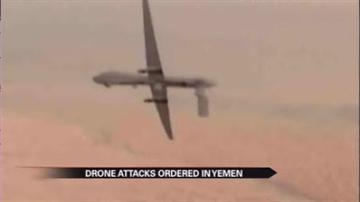 The White House has ordered drones to take out terrorists in the rumored terror plot in Yemen.

The ordered strikes are an attempt to interfere with planned attacks against United States Embassies and other western targets.

Officials believe the man behind the plots could get a lot of help, especially from maximum security prisoners across the Middle East who have recently escaped.

"We're talking about battle hardened terrorists who are now out and about and presumably re-joining their old comrades," said former Director of Homeland Security Michael Chertoff.

United States Embassies in more than a dozen countries will remain closed through the weekend.

Despite the worldwide terror alert, President Obama says Americans should not cancel their travel plans.