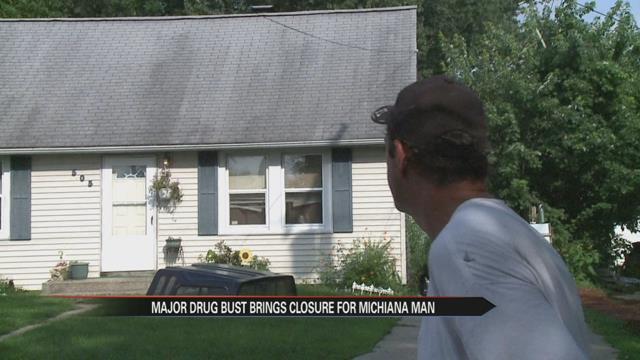 In a major drug raid in La Porte County, Narcotics Investigators found heroin and cocaine in a home after a traffic stop on Rockwood Street last Thursday.

The successful drug raid is a win for La Porte County Law Enforcement and their battle on drugs.

For one La Porte man, it brings closure after his brother’s overdose as the suspects are brought to justice.

Jeff Clougher lost his brother, John, on July 12 to a heroin overdose.

“It was rough. But I’m relieved that this guy is off the streets, and his friends,” said Clougher.

Clougher is referring to 26-year-old Ladon Earl Cameron of Chicago.

Cameron, along with two others, 34-year-old Ashley Selvidge and 52-year-old Joe Szynal, were arrested in a major drug bust at 505 Rockwood Street on Thursday, August 25.

Clougher‘s brother was seen with Cameron and purchased drugs from him frequently before he died.

“It’s very emotional. When I saw Mike Kellems, it was a relief that they got this guy,” said Clougher.

After a traffic stop in front of the house, over 20 officers from five different units were able to search the home.

“They got an undetermined amount of cocaine and heroin that was recovered in the search. They are still working on it. In addition to the three arrests that were made, there have been other arrests that are pending. The investigation continues,” said Officer Kellems.

Kellems says the residence was being rented and was being used as a “flop house” and point of sale for illegal narcotics.

“So we think we made a big dent in trafficking in the particular area.  It’s been a house of interest for some time. The collaborative work that they’ve done in this particular raid probably put a stop to drug trafficking in that area,” said Kellems.

“These people have no conscious to do what they are doing. My brother had five kids, by three different people, and grandkids. And everybody missed him. It was hard,” said Clougher.

For Clougher, even though his brother is gone, he says there is comfort and closure knowing Cameron is behind bars.

The three behind bars are awaiting a second hearing and are currently being held on $2,000 bond.

Clougher says he hopes his brother’s death will help others in the same struggle, to get the help they need and ultimately help clean up La Porte County.