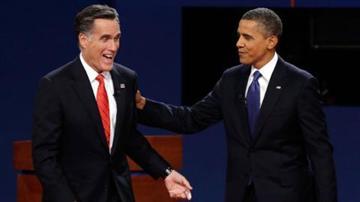 DENVER -- President Obama and Mitt Romney finally got their chance to face off.

Political analysts and observers rated Romney as the stronger debater.

Romney made many jabs at the president, including accusing Obama of spending his time in office concentrating on passing his health care plan at the expense of creating jobs.

Romney scored other key points during the debate, including tackling the economy.

“Gov. Romney has a perspective that says if we cut taxes and skew towards the wealthy and roll back regulations, that we’ll be better off,” said Obama. “I've got a different view.”

“The president has a view very similar to the view he had when he ran four years ago,” said Romney. “If you will, trickle down government would work. That's not the right answer for America.”

Thursday they're back out on the campaign trail and in next week's debate the vice presidential candidates get a chance to join in the action.