Dumpster puppies: Could you throw these dogs in the trash? 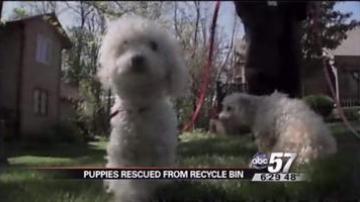 INDIANAPOLIS -- Thrown out with the trash, but saved from a terrible ending!

A pair of Indiana elementary school cafeteria workers were taking out the trash when they got quite a surprise!

They found two puppies in the dumpster!

The school checked its surveillance cameras, but had no luck finding who left them.

Now the pups have a new home.

Two students talked their dad into adopting the dogs.

It turns out that the puppies, now known as Milo and Fruit Loop were found in the nick of time. That dumpster was to be emptied the next morning!