Economic impact of the power outage 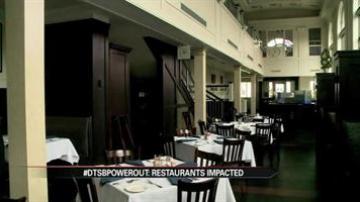 SOUTH BEND, Ind. -- A majority of the customers without power in downtown South Bend are businesses. Because it's graduation weekend, local restaurants and hotels were expecting to be busy. How much of a financial impact will the outage have on these businesses and the city?

This weekend, students at both St. Mary's College and the University of Notre Dame are graduating.

Many downtown businesses are using generators to stay open. But not all the businesses were able to reopen.

For Cafe Navarre and LaSalle Grill, there was no question of if they would reopen - but when. They each have around 1,000 reservations booked this weekend.

"This is only the second time in 23 years that we've been open that downtown has been without power," said Mark McDonnell, owner of the LaSalle Grill.

Right then, the generator kicked in.

The sound of the generator's engine was like the sound of money in the bank for McDonnell. This weekend could bring in as much as $60,000.

"We would have looked at a loss over the three days of somewhere to between $40,000 and $60,000. And worse than that - employees wouldn't have been paid," said McDonnell.

This outage hit downtown South Bend on its biggest money making weekend of the year.

"It's bigger than home football weekends, bigger than New Year's Eve because you've got Friday, Saturday, Sunday, three consecutive days of capacity, so we had about 1300 reservations," said Kurt Janowsky, owner of Cafe Navarre.

Restaurant owners and managers aren't just worried about the reservations.

Cafe Navarre did the same thing.

But after 30 years of working in the restaurant business, Janowsky says sometimes you just have to roll with the punches.

"These things happen, there's just nothing you can do about it. It's a hazard of being in any business," said Janowsky.