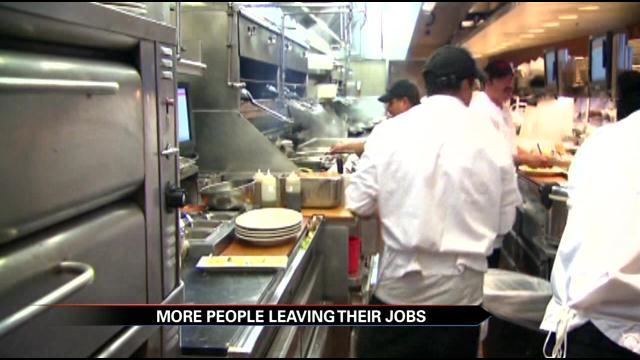 Unemployment nationally is at a 14-year low.

February saw the percentage of of jobless Americans drop to 5.5 percent.

But according to a new report, last year more workers quit their jobs and that trend is growing.

According to the Bureau of Labor Statistics, that's a 17 percent increase from the previous year.

Economists believe this is a sign of a recovering economy.

The total percentage of underutilized workers in 2014 was 12 percent.

And more people working in their field equals more competition among employers.

"That means that the employer needs to ask itself 'how can I be the employer of choice and how can I retain my employees,'" said Carrie Van Daele, CEO of Van Daele and Associates

This also means businesses have to work harder to retain valued employees.

And Van Daele believes fewer employees are willing to settle.

"It became the employees market," Van Daele said. "Irrelevant of an employees age, he or she wants to feel completely at full capacity, giving completely to an employer."

Van Daele, the author of Quit Sabotaging Your Company, says she's seen businesses struggle with employee retention due to the rising competitive nature of the jobs market.

She believes the solution is completely utilizing employees' talents so they always feel productive.

"In most cases, an employer really doesn't have an idea about the competency set or skills every employer has," said Van Daele. "The employer needs to identify how to better utilize the knowledge, the skills, and abilities of their employees and that's the way employees will stay at a company."

Expecting to maximize an employees' time calls for increase wages.

That's one of the ways jobs are staying competitive.

According to the Bureau of Labor Statistics, wages increased 2.2 percent last year.

Carrie Van Daele will continue this discussion during the “Are You Struggling To Keep Up With The Demand?” seminar in Elkhart, Tuesday, May 19. Click here for more information.