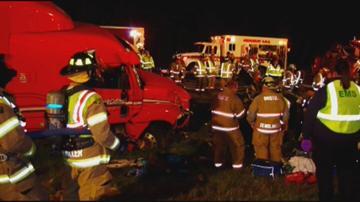 ELKHART, Ind. – In the aftermath of the tragic crash that left seven people dead and three injured late Thursday night after a semi struck the van they were riding in on the toll road the survivors and family members have gathered at Elkhart General Hospital and Memorial Hospital in South Bend.  All of the victims are from Ecuador, so the Ecuadorian Consulate in Chicago has sent a team to help the family deal with legal issues stemming from the accident and to help the family grieve.

Lecaro explained that many of the family members are heartbroken that a trip that was supposed to end in a happy occasion ended so terribly.

"They were from Chicago to New York, they were going to have a little party there, in the spanish it is a baptism," explained Lecaro.

The consulate in Chicago covers a five state area, helping Ecuadorian citizens in the US.  Among the team helping with the crash is a lawyer who has explained the family’s rights in the US and is also helping them deal with insurance companies.  The team is also helping the family get the bodies of their seven loved ones back to Ecuador.

“Right now we are making all the paperwork, they need to sign the papers and fax them to our office in New York,” Lecaro explained.  “They will begin the process to take the bodies to Ecuador.”

Lecaro and his team interviewed members of the family and the survivors who are able to talk about the accident.

“One of them spoke with us, but he doesn't want to remember all the things that happened," Lecaro described.

Lecaro said he and his team are also heart-broken while helping the family deal with their terrible loss.

"We only need to have all the support that people can give us,” Lecaro explained.  “Pray for the persons that passed away."

The van carrying the victims was carrying ten people from three families.  On Friday, police released their names:

Each of the survivors are from a separate family, they lost their spouses and all of their children.