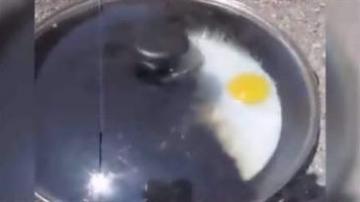 DEATH VALLEY, Calif. — The heat is on Death Valley, California.

The video shows a park employee demonstrating how to fry an egg using the sun and a skillet.

And since the release of that video, the park is now being littered with egg shells and cartons from copycat visitors.

The Death Valley National Park has made a public plea on their Facebook page asking visitors to stop frying eggs on the ground.

Temperatures in Death Valley this week have peaked at 129 degrees.

Park officials have warned the public that extreme temperatures can have serious effects.