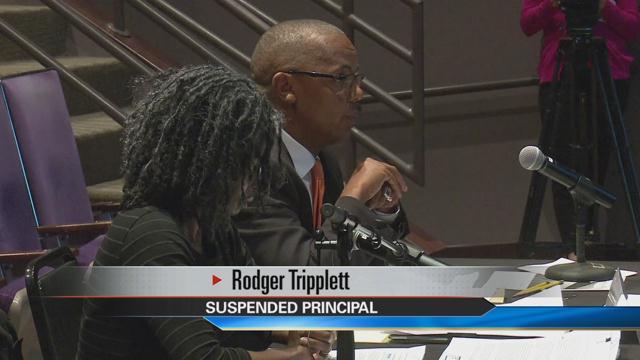 It was an eight hour long Benton Harbor Area Schools Board of Education meeting to decide the fate of suspended high school Principal Rodger Tripplett.

The Board requires four votes to take action, and they were unable to get the votes needed.  They voted 3-2, technically allowing Tripplett to remain a staff member of the school district.  The board did say they will hold reconvene October 27 at 6pm, where Tripplett's fate could be discussed again. One of the board members said this vote should be recessed, due to the fact one board member had to leave early, prior to the vote.  This decision comes after a full day of allegations and defenses from both the district and the community.

He says that hurts.

"I’ve dedicated more than half of my life to children of the Benton Harbor Area Schools. I know our board of education and I can say this and be proud of this – that I have always acted in the best interest of my students,” said Tripplett.

Eric Delaporte represents the school district and says that based off of the investigations, he does not feel that Tripplett is fit to remain a staff member of the schools.

“This is not the type of behavior that the board should tolerate as we become a school of excellence,” said Delaporte.

That came after the community stood in defense of Tripplett for more than an hour. Friends, family, and former students spoke out about Tripplett and the man they say he really is.

He was touched. Tripplett and his lawyer addressed each of those claims. They say they're meritless and untrue.

"[If the claims were true], they had a duty to remove him and they would have done it and they did not and that’s how we know it didn’t happen like they said it happened,” said Tripplett’s Lawyer.