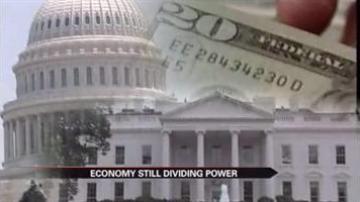 The election is over but it is still the "economy" that divides the power.

While there have been calls for bipartisan efforts, the President and House Speaker still don't see eye to eye on taxes.

Raising taxes on the wealthy was a centerpiece of President Obama's re-election message and Friday in his first public appearance since his victory he didn't back down.

Friday, the Speaker of the House also said next year, congress needs to begin to fix the debt problem through tax reform.

"We can't just cut our way to prosperity if we're serious. We have to combine spending cuts with revenue and that means asking the wealthier Americans to pay a little more in taxes," said President Barack Obama.

"This is an opportunity for the president to lead. This is his moment to engage the Congress and work towards a solution that can pass both chambers," said John Boehner, Speaker of the House.

Obama said he invited leaders from both parties to the White House next week to start working on these urgent issues.