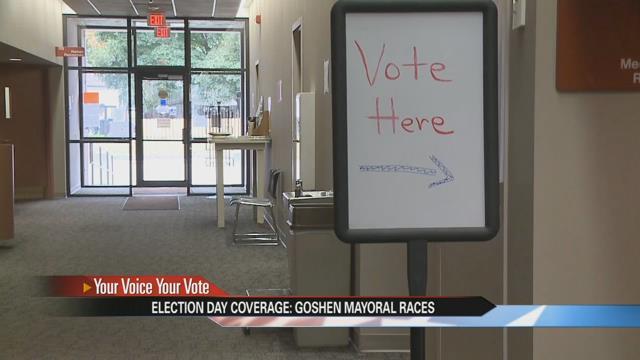 Tuesday is election day and voters began to come out to the polls at 6 a.m to cast their vote.

The two candidates in the mayoral race in Elkhart are incumbent Mayor Dick Moore and Republican candidate Tim Neese.

Moore is seeking his third term as the Elkhart city Mayor. Neese has spent years as a member on the City Council and served as a state representative.

According to the Elkhart Truth, Moore has had a low-key campaign and has zeroed in on some of his achievements as Mayor. A couple of those are improvements to Main Street and the Lerner Theatre.

Neese has talked about in his campaign what he would do as a leader. If elected, he has plans to establish a rapport among the council and to encourage feedback on any issues that arise.

The city of Goshen will get their first new mayor in after 18 years after the polls close Tuesday evening at 6.

Current Mayor Allan Kauffman will step down after serving the city since 1997.

During their campaign trail, both have spoken on issues of LGBT protections, city employees and labor unions, as well as how they would help the Latino community.

When it comes to the issue of blight in Goshen, the two candidates have differing opinions.

According to the Elkhart Truth, Stutsman has a five-point plan to fight blight. This would get onto problematic landlords who let their rental properties deteriorate.

The plan would also expand the city's court-appointed Receivership Program where a judge names a property manager to fix the blighted buildings using city funds. The city would be repaid once the work is done.

The Truth also said that Cripe supports tools provided by the state as well, like the Receivership Program; however would only use this when all other methods have been exhausted. She believes it would be better to talk to the homeowners about how they can establish a plan to improve their own properties.