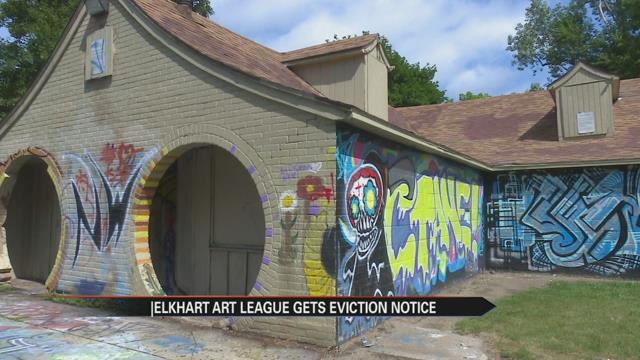 The Elkhart Art League needs to find a new building to call home but they say this is a hurdle they cannot jump alone.

The Elkhart Art League currently rents a building from the city of Elkhart located at High Dive Park.

It is an unassuming building, covered in graffiti on the outside and full of history and culture on the inside.

“Helen Heb, 1985” says Ellen Ridenour as she shows off paintings by local artists dating back 30 years.

The league’s legacy dates back even longer and it has been around for close to a century.

Ridenour is a Co-Vice President for the Elkhart Art League.

“Now they want to tear down our building and ya know we don’t know where we are going to go,” says Ridenour.

The Elkhart Art League at gives affordable art classes and allows local graffiti artists to use the building as a canvas.

“The guy who did this his name is Ben and he has been doing some really awesome work here,” says Ridenour as see shows me the building.

Ridenour received a letter, dated July 7th from the city explaining that they are tearing down the building.

Some reasons stated in the letter; the graffiti is not appealing and maintenance costs are too high.

“We came in here and painted everything the parks department complained about, we keep the inside up the best we can and we repair things the best we can,” says Ridenour.

Despite the effort, the Elkhart Art League has until September 30th to get out.

“I want to prove to the parks department that yea there are people using this building,” says Ridenour.

“I put down people who don’t want the building torn down and within one hour I got 51 names and there were 67 people,” says Ridenour.

On Wednesday afternoon one girl in the park said she lives with a disability and the building gives her joy.

“It makes me happy seeing all the beautiful art work and stuff like if I have a bad day just looking at it brightens up my day,” says Angel Basch, Elkhart Resident.

Ridenour says comments like Basch’s were common while she was surveying the public which is why she doesn’t understand why the art league has to leave.

Clyde Riley, Parks and Recreation Superintendent says his department is supportive of the art community but says the city has determined that the building is not safe for the artists to use.

For now the league has less than three months to find a new building that they can afford.