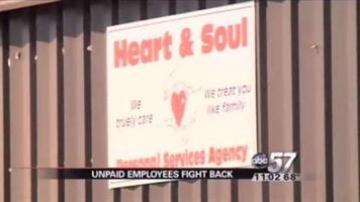 An Elkhart business owner is under fire after former employees said they continually got back checks, along with several of their former co-workers.

Vicky Stouder was a caregiver for Heart and Soul Personal Services, LLC, located at 23737 US 33 Suite C1, South of downtown Elkhart. She said the owner, Angela Butler, still owes her over two-hundred-dollars. But, she said she’s not alone. She claimed Butler also owes about fifteen others.

“She owes an awful lot of people. There’s a lot of people that quit because she wrote a lot of bad checks. And I’ve got the proof right here,” Stouder said.

Stouder quickly pulled out an organized blue binder stocked full of copies of bounced pay checks, police reports, and testimonies from former employees who wrote about their bad experiences of not getting paid for work.

“We just kept getting the run around from Angie about, well the money is in the bank, or this that, or other things. This lady needs to be stopped,” Stouder said.

Another woman did not want to give her name in fear of compromising her new job, but she said she went into debt because of the money Butler owed her at one point.

“I couldn’t pay my bills, I had to borrow money from my family to make ends meet and now I have to pay my family back,” she said.

Butler did not deny she owes her former employees. In fact, Butler told ABC 57 at one point, she was behind by a whopping $70,000. She blamed Medicare for not paying her.

“I could have closed my doors, like everyone else would have done, and filed for bankruptcy. But I kept fighting, and I’m going to keep fighting,” Butler said.

Butler further defended herself in that her employees knew they wouldn’t get paid on-time.

“We all sat down ahead of time, and everyone knew that I wouldn’t’ be able to pay them for awhile because I wouldn’t get the money in time,” Butler said.

Stouder said Butler never told her she wouldn’t get paid, “Lying to people! Lying! She can talk her way into selling you a Mercedes and you wouldn’t even know it until you signed the papers, because she talks in circles,” Stouder protested.

Butler was brought to tears when admitting she lost her own home in the midst of this all. She said she does not understand why her former employees are turning their backs, and trying to bring her down.

The unidentified woman said enough is enough. “Let’s do what we got to do to make this person stopped! Make her do restitution,” she said.

Bulter did not appear in court on Thursday, July 28th.

“What’s the point? I know I owe the money. I’m not going to waste my time, because I’m not disputing it,” Butler said.

Butler did not know exactly how much money she currently owes everyone, including people on salary, officer workers, and caregivers. She claimed she has paid tens of thousands of dollars back since 2010.