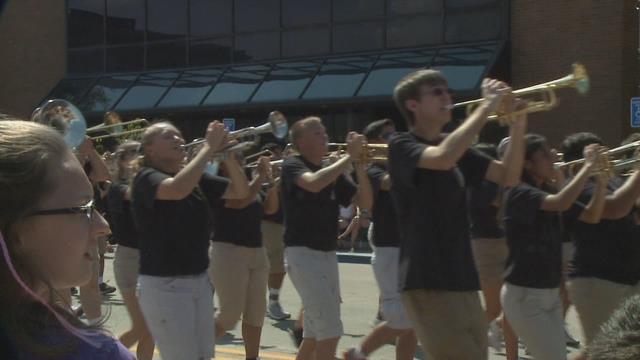 On Monday afternoon in downtown Elkhart, people celebrated labor day with a parade. Parents and kids lined up along Main Street to see Mayor Tim Neese hand out candy and the marching bands.

This time around there was more diversity in terms of the organizations that showed up. Many say the only saw unions walking, but this time around marching bands were the main attraction.

“It’s real exciting. We’re very proud of her cause she enjoys it very much.” said Karen Crosby who's attended for 10 years!

Parents and family weren't the only ones spotting out talent. Kids were there to see who was showcasing the best of the best.

“Watching the parade and having a good time with my family," said Charlotte a 13-year-old. "And watching everyone do their thing in the parade.”

From waving hands to goodies being given out, the community of Elkhart managed to put all this together in a matter of two weeks.

The Parks and Recreation Superintendent says he was most excited to see the faces of those who cherish Elkhart and value workers---but says the reasoning behind the parade was to send an appreciation message.

“I’m most excited to see people come out and celebrate great things about our country, our city, our state…." says Clyde Riley the Superintendent.

Two young singers were invited to sing the National Anthem to kick off the parade today.

Jalen Thomas and Kendra Jeremiah grew up together and now they say they are excited to share their gift.

“When you’re singing you always have that feeling of jitters that you want to do well and you’re always nervous because you want to sound good," says the 15- year-old Thomas.

“My favorite part is just when we’re done and the getting to hear what people say about our singing and what really touched their hearts,” responds Jeremiah, who started singing at two.