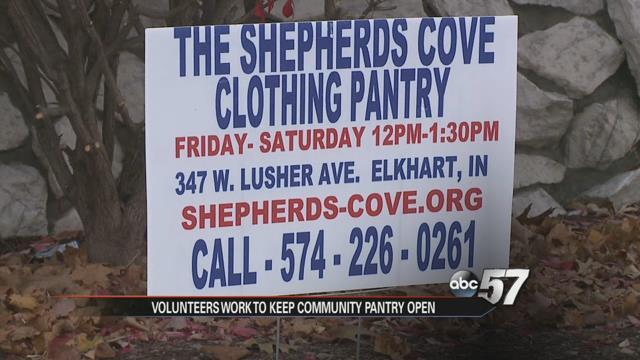 This past April, ABC57 introduced you to a clothing pantry in need – The Shepherd’s Cove in Elkhart.

On Saturday, The Shepherd’s Cove celebrated its one year anniversary and a call for new fundraising was discussed.

“A little boy found a pair of boots and he was wearing them throughout this store here and it was just wonderful to see him,” Shepherd Cove volunteer Jane Bragg said. “He was happy he got a new pair of boots!”

That story is one of hundreds inspiring the volunteers working at the pantry on West Lusher Avenue in Elkhart.

The pantry provides families in need with everything from clothing and furniture to shoes and home decorations – all for free.

Shepherd Cove Executive Director Sharlee Morain said she was elated the pantry managed to stay open for a full year.

“I am so excited!” Morain said. “I am so jazzed! You know, if I was young, I could do cartwheels.”

But with record numbers of families coming to the pantry – more than 400 in August alone – they’re still faced with the problem of paying the bills.

“The community has really stepped up to donate tangible items [clothing, household goods],” Morain said. “But I just don’t think that they realize that we have $3,000 a month worth of overhead.”

That’s why volunteers spent Saturday afternoon holding an open house and craft fair where handmade goods donated by the community were sold to raise money.

Morain said all this time and effort is put in because giving is contagious.

“[Every one of my volunteers] have caught ‘cove fever’ and we love on people!” Morain said.

The Shepherd’s Cove is in need of financial backers.

Morain said if 600 people donated $5 a month, all of the pantry’s expenses would be covered.

You can donate to the pantry by visiting its website.