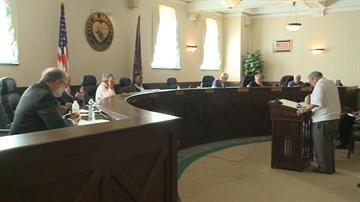 Tuesday’s meeting was the first of six scheduled sessions where the council will review Mayor Dick Moore’s (D-Elkhart) plan to make nearly $2 million in cuts to the budget page by page.  The council members asked questions of the mayor and department heads about the proposed allocations for 2013; though the dialogue seemed peaceful it wasn’t because all council members agreed with the mayor’s proposals.

“The issues is several of the council members realize that we have departments in need, they need more manpower, more staffing, however we cannot put back anything,” explained Councilman David Henke (R-3rd District).  “We are handed a book, our hands our fairly tied and we're expected to not be a participant but be a representative of the people that's very hard to do without sounding argumentative."

Bylaws prevent council members from rescinding the cuts proposed by Mayor Moore and they can only suggest additional cuts at the end of the process.  Henke said he does plan to make additional cuts; he wants to eliminate six to eight jobs in addition to the two the mayor has proposed to cut and the seven vacant jobs that will no longer be filled.

Henke wouldn’t name all the jobs he wants to cut with the exception of the position of airport director.  He has proposed to privatize Elkhart’s airport and outsource the job of collecting city debts to a private collection’s agency.  The City Clerk’s office reported at the meeting that they will be hiring a collections agency to collect overdue fees.  Henke said that showed progress, but he wished the legal department would do the same and was the lone dissenting vote when the council tentatively approved the budget proposal for the legal department.

"Frankly we know that would free up dollars and free up hours to give back to the legal department," Henke explained.  “I personally would outsource a considerable amount of services, I do not have that authority, I can strongly suggest it to the mayor, I can’t obligate him to do it.”

Councilman Dave Osborne (D–1st District) said the Henke’s privatization argument was a distraction from the current budget debate and that the mayor has already privatized some city services and contract negotiations with some other services are expected to save the city more money in the future.

"Those are a lot of talking points and sound bites that sound good and don't always necessarily pan out," Osborne said of the privatization arguments.  “We’re under contract on a lot of things and you just can’t negate a contract because somebody’s telling you they got a better deal.”

Four republicans and one democrat on the council have criticized Mayor Moore’s proposed budget, saying that he hadn’t made enough cuts and hadn’t included council members in a discussion of the budget.  Osborne disagreed on Tuesday, saying Moore has a history of making deep cuts.

“Up until this year the mayor had cut almost three-and-half-million out of the budget in the last three years, with this budget we're over five-million in reductions,” Osborne described.  “So we're continuing to make the cuts and being as thrifty as we can."

The council meets for another budget session at 6 p.m. on Wednesday, they are slated to review allocations for the city controller, debt service, information technology, human relations, human resources, aviation and grants.