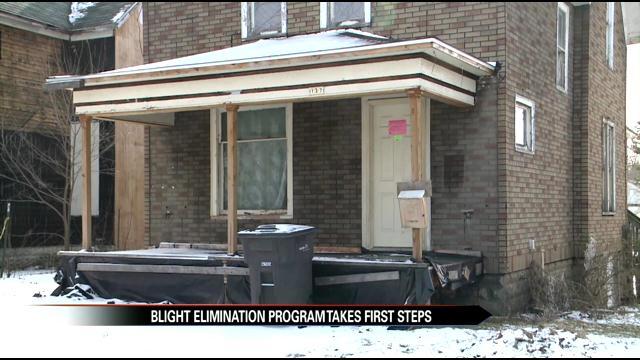 There are currently about 400 blighted properties in Elkhart County. LaCasa, Inc., a non-profit housing agency in Michiana, is attempting to change that statistic.

The name of their project is the ‘Blight Elimination Program' and the goal is to remove problem properties and address the decline of neighborhoods.

LaCasa, Inc. submitted a proposal to the Indiana Housing Community Development Authority about a year ago and it wasn't until last Friday that the group was given the approval to go forward with getting rid of the first house on its list.

Daniel Weddington, an Elkhart property owner, is hoping he can benefit from this program.

“I was ready to take care of the house and I knew it was going to be an investment but then to get railroaded with all these problems and then to have somebody on you,” said Weddington.

Weddington bought a two story home on Park Avenue in Elkhart as part of a quitclaim deed. He knew he would have a lot of work ahead of him but he didn't imagine how much.

Not only are structural repairs on the list of expenses Weddington faces, but he was also stuck with expenses from the previous owners.

The amount to fall on Weddington's lap was $1,400. The city was demanding both structural upgrades and back taxes in a short amount of time.

“I wasn't able to get that in the time period that they needed that by. So I still own the house but it is in a tax lien right now,” said Weddington.

Now Weddington faces three options. Fix the house with money he doesn't have, let the city take the home and pay thousands of dollars to tear it down, or agree to sell the home to LaCasa.

“We will offer a dollar amount for the property. This is an opportunity for them to get out of a problem property that isn't making any money for them," said Brad Hunsberger, Vice President of Real Estate Development at LaCasa Inc.

The program has received funding from the Indiana Housing Community Development Authority to remove 111 blighted homes from the county. The agency must use all these funds by January 2016.

Weddington is waiting to see if his home meets the requirements of the Blight Elimination Program. If it does he plans to sell his home to LaCasa and wipe his hands clean of the home.

“Ya know with the program taking the house off my hands it would be a big blessing,” says Weddington.