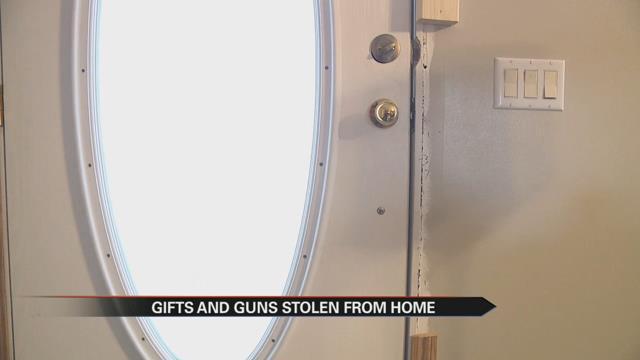 Just days after scoring some Black Friday deals, a couple in Goshen is now out thousands of dollars in electronics, jewelry, and guns.

Police say home break-ins happen all year long but during the holidays there does seem to be an increase.

The Elkhart County couple recently moved to the area and they want their new neighbors to be alert.

That's why she moved into the home off County Road 21 in Goshen.

Fowler and her husband moved to Elkhart County in July and their first holiday season in their new home isn’t off to a good start.

“My husband came in first through the garage and said sure enough they hit us,” says Fowler.

Sunday evening around 5 p.m. the Fowlers came home to find their front door kicked in.

“Then when I walked in and saw the TV gone I thought oh my god that was our Christmas present. That’s gone and what else did they take,” says Fowler.

Many of the deals they got are now gone.

“They took a laptop, a tablet, they took jewelry from my room, and watches,” says Fowler.

The most startling discovery a gun case once full is now missing eight shot guns.

“We know there are guns out there. But what’s more concerning is who has them and if they get into the wrong hands,” says Captain Jim Bradberry with the Elkhart County Sheriff’s Department.

Captain Bradberry says while working on home burglaries whether it is a flat screen or a weapon the department urges you to keep track of serial numbers.

“A lot of time I’m sure when you have stolen items such as this they probably have broken into other homes and this could actually help solve other crimes,” says Captain Bradberry.

Now the Fowlers are taking steps to keep their quaint home secure.

“Just making sure doors are locked, maybe get a security system and alerting our neighbors of what’s going on,” says Fowler.

Captain Bradberry stresses that Elkhart County residents need to be proactive and lock doors to both their home and cars.

Here is a list of apps that can be used to easily track your serial numbers and home inventory: