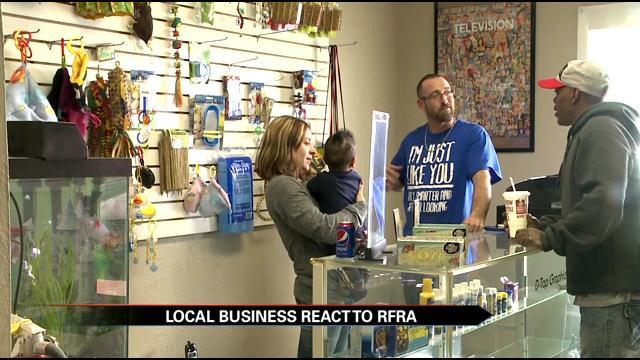 In Indianapolis, Governor Mike Pence held a press conference Tuesday to discuss the Religious Freedom Restoration Act he signed into law last week, and the negative publicity surrounding it.

Several businesses, groups, and politicians have spoken out against the Religious Freedom Restoration Act, which some say would open up the ability for business owners to discriminate against people based on their faith.

In Tuesday's address the governor says he plans to ask lawmakers to clear up the law by the end of the week.

The act's language, according to Pence, will change to protect groups like the LGBT community.

And in Elkhart county reps all voted in favor of the bill last week.

Many businesses in the county felt their votes didn't reflect the opinions of the communities they serve.

And now, many Elkhart taxpayers are speaking out against the controversial new law.

A law they believe enables prejudice despite the governor ensuring that's not the case.

"I think it's totally discrimination," said Michael Baker, owner of Michael Baker Salon. "I mean, why do we have to bring the religious factor into it? I mean we were well off alone."

Baker says his salon, much like many businesses in Indiana,services everyone.

And laws like this will makes businesses in the state look bad.

"What's the total repercussion going to be on Indiana?" he said. "And I don't think it's something that we need."

"Businesses are boycotting, not wanting to expand in the state of Indiana because of this," said Don Holaway, co-owner of Elegant Designs. "You know, I can understand."

In the middle of Elkhart and St. Joseph counties is a new business looking to open its doors.

But the owners of Finn's Exotics and Aquatics believe lawmakers are shut off to the opinions of voters.

"Get out there, walk around to these businesses, small or large, and seek these people's opinions because they matter," said Christine McKenna, general manager of Finn's Exotics and Aquatics.

And taxpayer Frederick Henderson thinks without seeking their input, legislators are taking away voters' voices.

"He took it upon himself to speak for the people," said Henderson