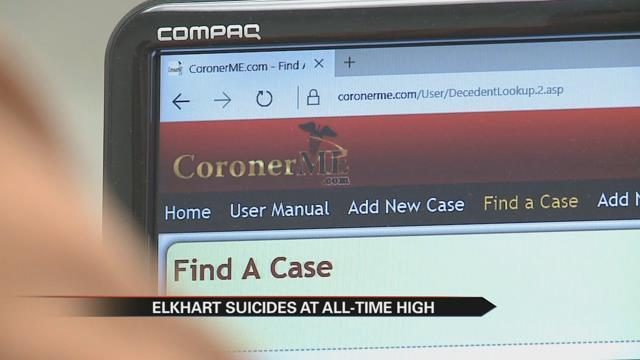 The Elkhart County Health Department says suicide has no rhyme or reason but they are using education to decrease these numbers.

John Hulewicz counts the number of suicides that have been reported to the Elkhart County Health Department over the past years. The numbers are all in the teens so this year’s numbers are alarming.

While collecting year end data Chief Deputy Elliot discovered the highest suicide rate Elkhart County has seen. The highest number in recent years was 2013 when there were 19.

“We’ve had an alarming number of asphyxiation by ligature, which is a hanging. Why people are choosing to take their own lives and do it by that manner we don’t have an answer for that,” says Elliot.

Health department officials say a reason may never be known.

“The numbers when it comes to people taking their own lives has no rhyme or reason,” says Hulewicz.

Hulewicz admits there’s a lack of resources in the area.

“Elkhart County is an under served county when it comes to mental health therapy both psychiatrist and social workers,” says Hulewicz.

His department is training the public to be aware of signs of depression or mental illness.

“Your heart really goes out to these individuals and families who are suffering and grieving the death of a loved one by suicide. There is often a lot of unanswered questions,” says Laurenne Hamlin a Grieving Counselor with Ryan’s Place.

Hamlin sees families whose’ loved ones have taken their own lives.

“It’s a really hard thing for people to want to admit that they are thinking about suicide. The more information people can get out there the more people might be willing to talk about it,” says Hamlin.