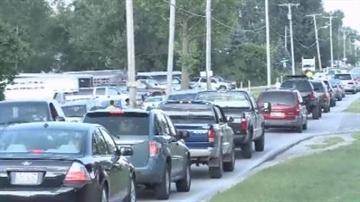 Monday was a big night for the Elkhart County Fair and the traffic in Goshen was proof of that. Drivers said they thought the nice weather and Florida Georgia Line concert drew the large crowds.

Foot traffic, car traffic, truck traffic. You name it, you've got it outside the Elkhart County Fair.

“I would say tonight’s traffic is some of the worst I’ve seen,” Parking Manager Nate Miller said.

“I think it was almost two hours, bumper to bumper. The traffic is really bad, it really is, and people kept on cutting in all the time and they’d cut across the school to try to squeeze in,” Fair-goer Arlene Leighton said.

“We saw so many, all the way down almost to downtown is how long the line was,” Fair-goer Matthew Oliver said.

People waited to get close to the fairgrounds for hours.

“We thought we were just going to get up and get in because it’s only a Monday,” Oliver said.

The worst of the traffic came after the concert when everyone rushed to leave at once.

“When you leave it gets worse,” Leighton said.

Hot temperatures and high gas prices aren't helping matters for drivers who prefer to run their vehicle's air conditioning while sitting in the long lines of traffic.

“If the weather was cooler, it wouldn’t be so bad, and you know what it does? You have to leave your car running with the gas prices out here, it makes it rough,” Leighton said.

However, most drivers seemed to keep their cool.

“You don’t hear people even while they’re waiting in line, yelling and blowing their horns.You just don’t see it,” Miller said.

Miller tells ABC 57 News that the Elkhart County Fair Board has been hoping to build another entrance off of County Road 36 to alleviate traffic. He said he hopes this year's traffic will put that plan into action faster.